Microsoft Teams General Manager Nicole Herskowitz outlines several new calling features and improvements with the article Restore and maintain personal connections with new Microsoft Teams Calling features. I am interested in seeing voice-enabled channels where a team can share information about calls they are taking, such as an IT or HR help desk.

Tony Redmond provides some insightful knowledge on Why Recurring Teams Meetings Share the Same Online Workspace. People may be surprised to find that each instance of a meeting in a recurring series shares the same workspace of chat, notes, and whiteboard content. Tony explains how this works and the pros/cons of this model.

Tom Arbuthnot outlines a new service from Microsoft called Device as a Service. You can purchase Microsoft Teams devices using finance options over a specified number of years. At the end of the contract, you have the option of upgrading the device. The service is currently available in the U.S. with additional regions coming in 2021.

On December 16, 2020, Microsoft is hosting an online event on Developing Apps for Microsoft Teams. This 2-hour live stream will explain what Teams apps are, how you can build them, and how you can integrate them with Teams.

When presenting in PowerPoint, presenters can view notes and upcoming slides. Microsoft is scheduling the release of this feature in January 2021.

Road Map: Live reactions in Teams Meetings
Meeting attendees can react during a meeting with emojis that will appear to all participants. Microsoft is scheduling the release of this feature in February 2021.

Message Center: Use an iPad to present in a Live Event

Presenters can use an iPad to make a presentation. The iPad must be running iOS 10 or later and require a minimum iPad version of iPad Mini 2/3, iPad 4, iPad Air 1/2, or any iPad Pro. Microsoft will begin rolling out the updated Teams app for iPad in early January 2021.

Microsoft is moving the following links to a new menu in the title bar:

The Profile or Me Menu will now focus on account management, including account and tenant switching. Microsoft will begin rolling these changes in late January 2021.

I recently published my latest course on PluralSight for Upgrading to Microsoft Teams from Skype for Business. This course covers everything you need to get started on your migration, including coexistence modes, interoperability, and meeting migration.

Tip of the Week

On Twitter, Randy Chapman outlines how to set a duration for status changes in Microsoft Teams. Great if you want to appear busy or do not disturb and don’t want to forget to revert the status later on. 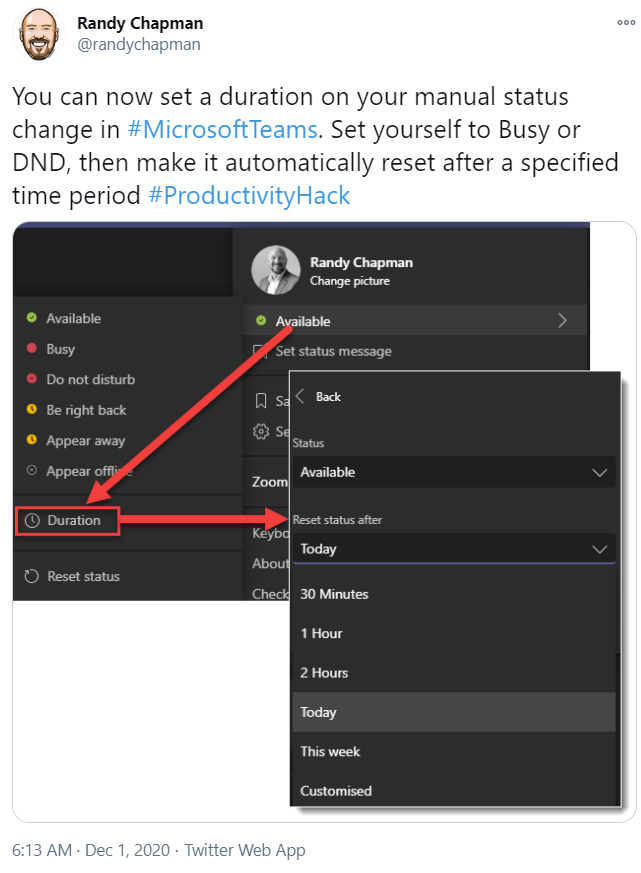 Include some holiday cheer with these 24 free winter and holiday backgrounds for Microsoft Teams.