What is PGP Encryption and How Does It Work?

Pretty Good Privacy (PGP) is an encryption system used for both sending encrypted emails and encrypting sensitive files. Since its invention back in 1991, PGP has become the de facto standard for email security.

The popularity of PGP is based on two factors. The first is that the system was originally available as freeware, and so spread rapidly among users who wanted an extra level of security for their email messages. The second is that since PGP uses both symmetric encryption and public-key encryption, it allows users who have never met to send encrypted messages to each other without exchanging private encryption keys.

If you want to improve the security of your email messages, PGP offers a relatively easy and cost-effective way to do this. In this guide, we’ll show you how.

How Does PGP Encryption Work?

In order to understand how PGP works, it’s useful to look at a diagram: The mathematics behind encryption can get pretty complex (though you can take a look at the math if you like), so here we’ll stick to the basic concepts. At the highest level, this is how PGP encryption works:

This might seem like a strange way to do things. Why would we encrypt the encryption key itself?

Example of PGP Encryption in Action

In practice, sending a message encrypted with PGP is simpler than the above explanation makes it sound. Let’s take a look at ProtonMail – as an example.

ProtonMail natively supports PGP, and all you have to do to encrypt your email is to select Sign Mail. You will see a padlock icon on the subject line of their emails. The email will look like this (the email addresses have been blurred for privacy reasons): 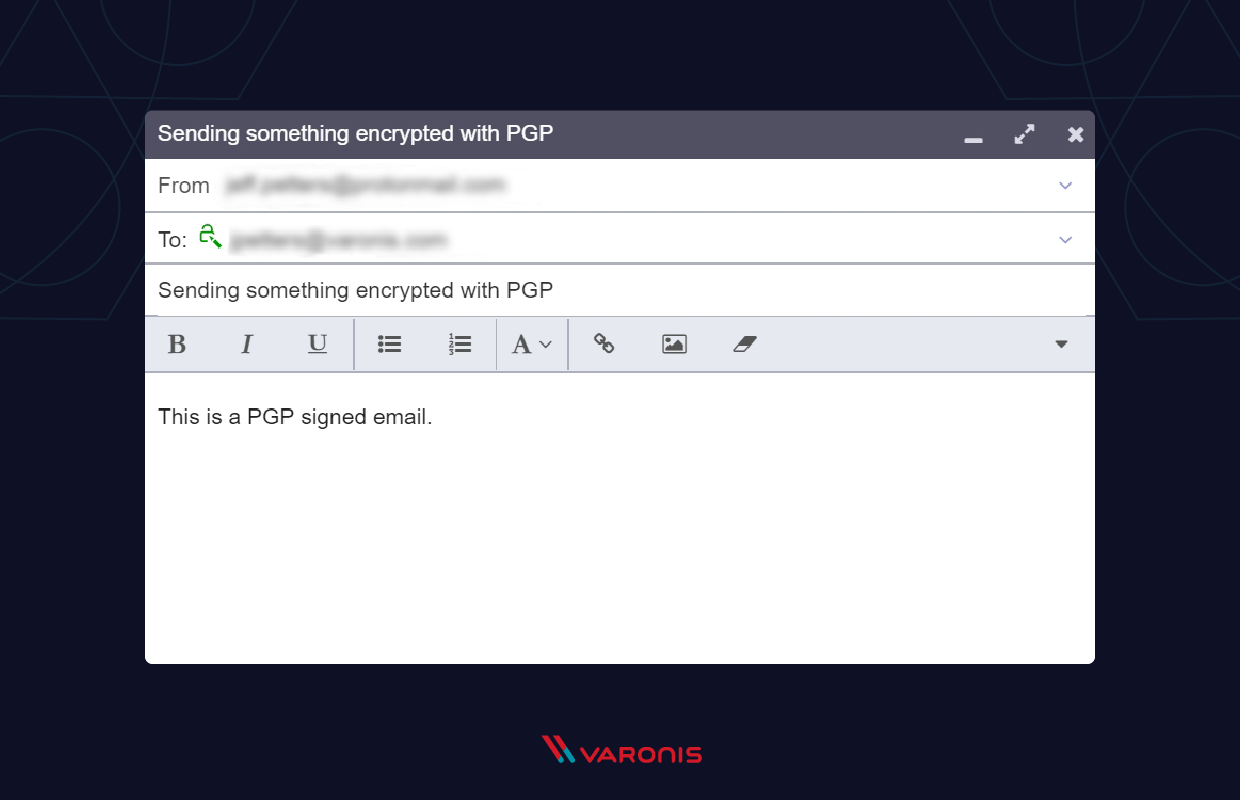 ProtonMail – like most email clients that offer PGP – hides all of the complexity of the encryption and decryption of the message. If you are communicating to users outside of ProtonMail, you need to send them your public key first. 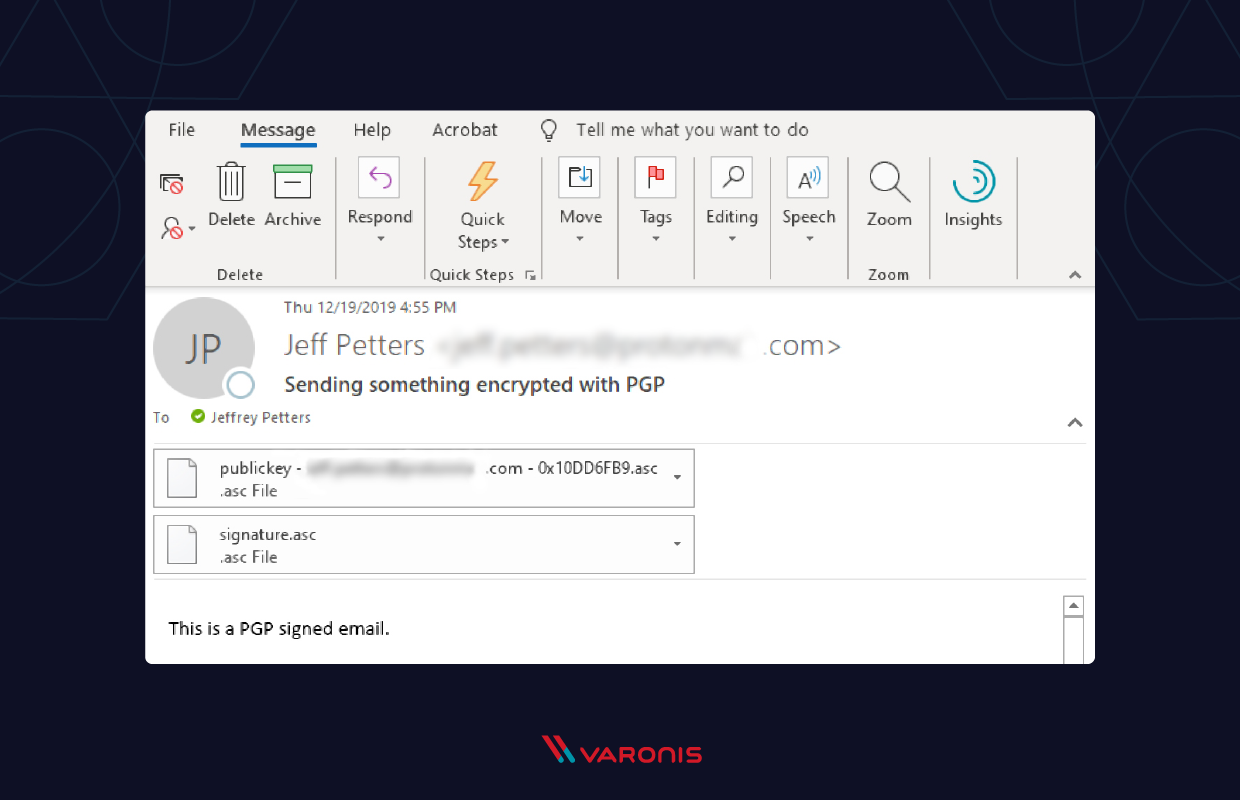 And so, although the message was sent securely, the recipient does not have to worry about the complexities of how this was done. 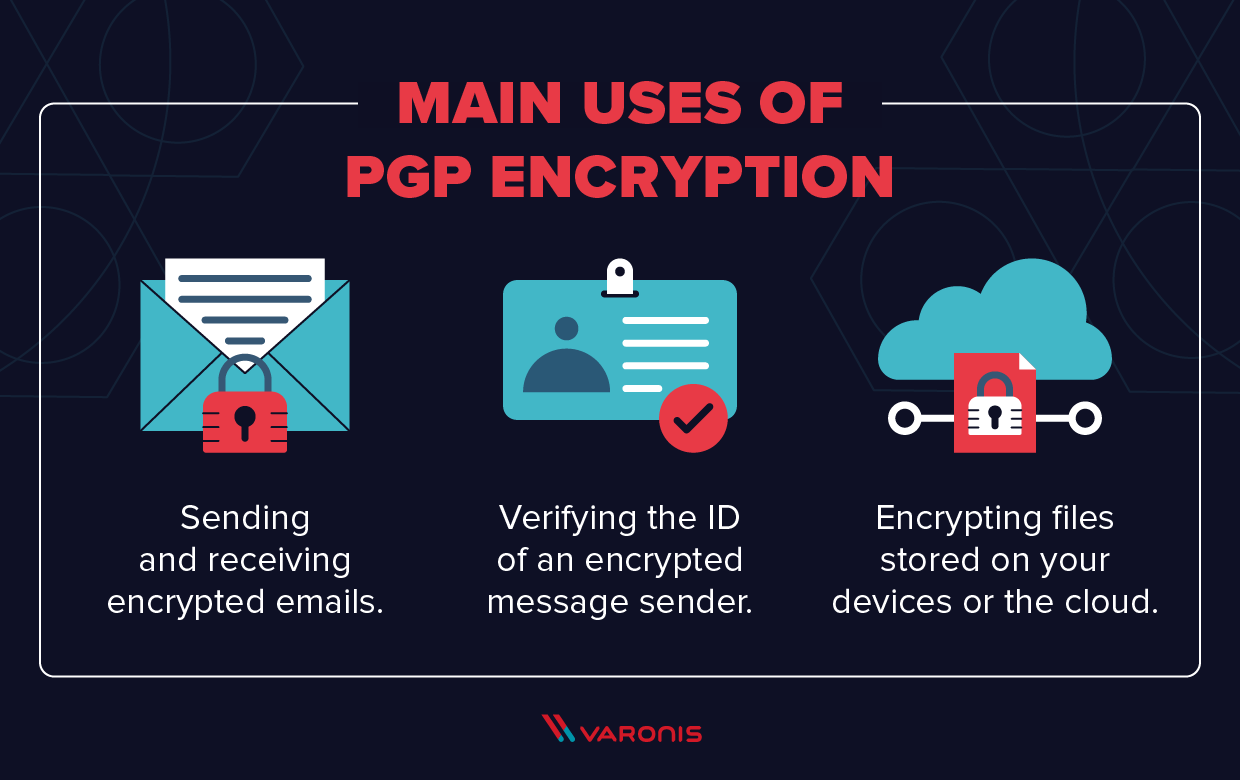 There are, essentially, three main uses of PGP:

Of these three uses, the first – sending secure email – is by far the dominant application of PGP. But let’s take a brief look at all three

As in the example above, most people use PGP to send encrypted emails. In the early years of PGP, it was mainly used by activists, journalists, and other people who deal with sensitive information. The PGP system was originally designed, in fact, by a peace and political activist named Phil Zimmermann, who recently joined Startpage, one of the most popular private search engines.

Today, the popularity of PGP has grown significantly. As more users have realized just how much information corporations and their governments are collecting on them, huge numbers of people now use the standard to keep their private information private.

A related use of PGP is that it can be used for email verification. If a journalist is unsure about the identity of a person sending them a message, for instance, they can use a Digital Signature alongside PGP to verify this.

Digital signatures work by using an algorithm to combine the sender’s key with the data they are sending. This generates a “hash function,” another algorithm that can convert a message to a block of data of fixed size. This is then encrypted using the sender’s private key.

PGP is great for small tasks but to protect a network of data you need more. Varonis helps organizations secure their data across file servers, SaaS apps and source control systems. Find out more now.

A third use of PGP is to encrypt files. Because the algorithm used by PGP – normally the RSA algorithm – is essentially unbreakable, PGP offers a highly secure way of encrypting files at rest, especially when used alongside a Threat Detection and Response Solution. In fact, this algorithm is so secure that it has even been used in high-profile malware such as the CryptoLocker malware.

Whether you need to use PGP encryption will depend on how secure you want your communications (or files) to be. As with any privacy or security software, using PGP requires that you do a little more work when sending and receiving messages, but can also dramatically improve the resilience of your systems to attack.

Though there have been some news stories that point out security flaws in some implementations of PGP, such as the Efail vulnerability, it’s important to recognize that PGP itself is still very secure.

The biggest con of PGP encryption is that it is not that user-friendly. This is changing – thanks to off-the-shelf solutions that we will come to shortly – but using PGP can add significant extra work and time to your daily schedule. In addition, those using the system need to be aware of how it works, in case they introduce security holes by using it incorrectly. This means that businesses considering a move to PGP will need to provide training.

For that reason, many businesses might want to consider alternatives. There are encrypted messaging apps like Signal, for instance, that offer encryption that is more straightforward to use. In terms of storing data, anonymisation can be a good alternative to encryption and can be a more efficient use of resources.

Finally, you should be aware that PGP encrypts your messages, but it doesn’t make you anonymous. Unlike anonymous browsers using proxy servers or working through a VPN to hide your true location, emails sent through PGP can be traced to a sender and recipient. Their subject lines are not encrypted either, so you shouldn’t put any sensitive information there.

How Do I Set Up PGP Encryption?

In the vast majority of cases, setting up PGP encryption involves downloading an add-on for your email program, and then following the installation instructions. There are add-ons like this available for Thunderbird, Outlook, and Apple Mail, and we will describe these below. In recent years we have also seen the emergence of a number of online email systems that include PGP by default (the most famous being ProtonMail).

For those of you looking to use PGP to encrypt your files, there are a number of large-scale software solutions available. Symantec, for example, offers PGP-based products such as Symantec File Share Encryption for encrypting files shared across a network and Symantec Endpoint Encryption for full disk encryption on desktops, mobile devices and removable storage.

If you are looking to start using PGP encryption, this will normally involve downloading a piece of software that automates the process of encryption and decryption. There are a number of different products available to do this, but you should be aware of what to look for.

How to Select PGP Software

Depending on why you are using PGP, and how often you need to use it, there are several different approaches to setting it up. In this section we will focus on what most users will need from PGP – secure email – rather than encrypted file storage, which is a more complex issue. Here, then, are five solutions for implementing PGP on your home or business networks.

Gpg4o is one of the most popular PGP solutions for Windows users and aims to integrate seamlessly with Outlook 2010 – 2016.

The standard implementation of PGP encryption for Mac users is GPGTools, which is a suite of software that offers encryption for all areas of your Mac system.

As with the tools above, Enigmail was designed to integrate with a specific email client, in this case, Thunderbird.

ProtonMail was one of the first secure email providers and remains one of the most popular. Unlike the solutions above, ProtonMail operates through a web portal, meaning that it is easily separable from your everyday inbox.

Lastly is FairEmail, which extends PGP encryption to Android phones. This is a stand-alone email app that is free to use.

Even after the explanation above, you may still have some questions. Here are the answers to the most commonly asked questions about PGP.

A: Yes. Though PGP is now more than 20 years old, there have been no vulnerabilities found in the basic implementation of the system. That said, encrypting your emails is not sufficient for total security, and you should always use PGP in combination with a full cybersecurity suite that includes threat detection software.

Q: How does PGP encryption work?

A: PGP uses a combination of symmetric and public-key cryptography to provide users with a secure way to send messages to each other.

Q: What is the best PGP software?

A: The “best” PGP software will depend on your needs. Most people don’t need to encrypt all of their emails, and so for most people a web-based PGP email provider will be the best solution. That said, if you are frequently sending emails that need to be encrypted, you can consider downloading a PGP add-on for your standard email client.

Q: Do I need encryption software?

A: It depends. If you are storing customer information, the answer is yes. Encrypting your personal files is not a necessity, but can dramatically improve your defenses against a cyberattack. Encryption software based on PGP is generally some of the easiest to work with, and is a good place to start when it comes to encrypting your files.

PGP encryption can be a powerful tool in protecting your data, your privacy, and your security. It provides you with a relatively easy, completely secure method of sending emails, and also allows you to verify the identity of the people you are communicating with. Because PGP add-ons are also available for most major email clients, this form of encryption is generally easy to implement.

All this said, secure email is only one aspect of cybersecurity. You should ensure that, in addition to PGP, you also use a robust data security platform and Data Loss Prevention software. Making use of as wide a range of tools as possible is the best way to ensure your privacy and security.

Data Protection Guide: How To Secure Google Drive for Your Business