What is Mimikatz: The Beginner's Guide

Benjamin Delpy originally created Mimikatz as a proof of concept to show Microsoft that their authentication protocols were vulnerable to attack. Instead, he inadvertently created one of the most widely used and downloaded hacker tools of the past 20 years.

Rendition Infosec’s Jake Williams said, “Mimikatz has done more to advance security than than any other tool I can think of.” If you’re tasked with protecting Windows networks, it’s essential to keep up with the latest Mimikatz updates to understand the techniques hackers will use to infiltrate your networks – and stay one step ahead.

Mimikatz is an open-source application that allows users to view and save authentication credentials like Kerberos tickets. Benjamin Delpy continues to lead Mimikatz developments, so the toolset works with the current release of Windows and includes the most up-to-date attacks.

Attackers commonly use Mimikatz to steal credentials and escalate privileges: in most cases, endpoint protection software and anti-virus systems will detect and delete it. Conversely, pentesters use Mimikatz to detect and exploit vulnerabilities in your networks so you can fix them.

What Can Mimikatz Do?

Mimikatz originally demonstrated how to exploit a single vulnerability in the Windows authentication system. Now the tool demonstrates several different kinds of vulnerabilities. Mimikatz can perform credential-gathering techniques such as: 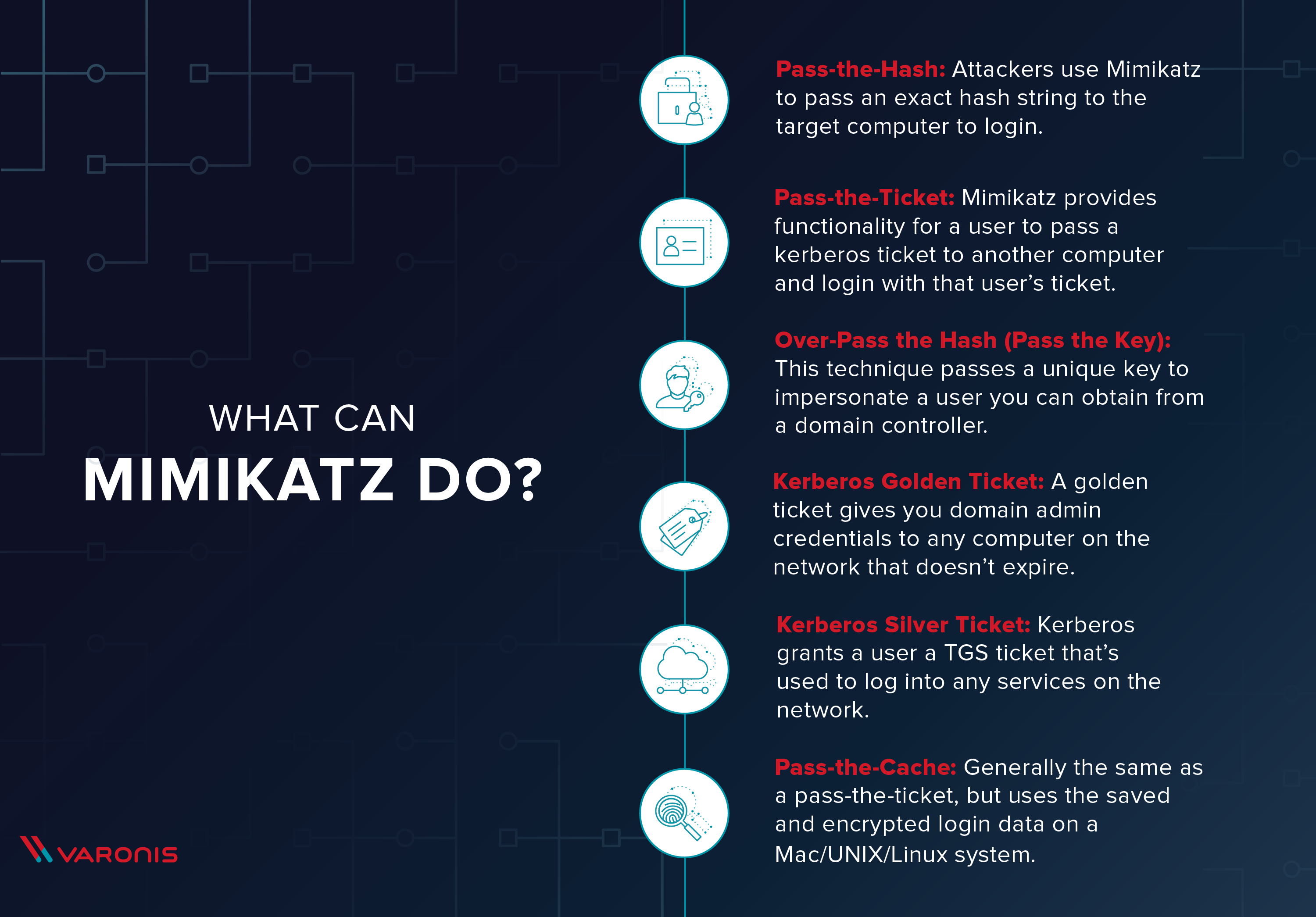 You can download Mimikatz from Benjamin Delpy’s GitHub – he offers several options to download, from the executable to the source code. You will need to compile with Visual Studio 2010 or later.

How Do You Use Mimikatz

When you run Mimikatz with the executable, you get a Mimikatz console in interactive mode where you can run commands in real time.

Run Mimikatz as Administrator: Mimikatz needs to be “Run as Admin” to function completely, even if you are using an Administrator account.

There are 2 versions of Mimikatz: 32bit and 64bit. Make sure you are running the correct version for your installation of Windows. Run the command ‘version’ from the Mimikatz prompt to get information about the Mimikatz executable, the Windows version, and if there are any Windows settings that will prevent Mimikatz from running correctly.

The  module sekurlsa in Mimikatz lets you dump passwords from memory. To use the commands in the sekurlsa module, you must have Admin or SYSTEM permissions.

The output will show if you have appropriate permissions to continue.

Next, start the logging functions so you can refer back to your work.

And finally, output all of the clear text passwords stored on this computer.

The crypto module allows you to access the CryptoAPI in Windows which lets you list and export certificates and their private keys, even if they’re marked as non-exportable.

The kerberos module accesses the Kerberos API so you can play with that functionality by extracting and manipulating Kerberos tickets.

And lastly, the coffee command returns ascii art of coffee. Cause everyone needs coffee.

There is so much more to Mimikatz. If you are looking at penetration testing or you just want to dig into the Windows authentication internals, check out some of these other references and links:

Want to Mimikatz in action and learn how Varonis protects you from infiltration?  Join our free Live Cyber Attack Workshop and see our engineers execute a live cyberattack in our security lab.