What is an Insider Threat? Definition and Examples

An insider threat is a security risk that originates within the targeted organization. This doesn’t mean that the actor must be a current employee or officer in the organization. They could be a consultant, former employee, business partner, or board member.

According to the 2019 Varonis Data Risk Report, 17% of all sensitive files were accessible to every employee.

So what do these statistics tell us? Insiders have the capabilities, motivations, and privileges needed to steal important data – which makes it a CISO’s job to identify and build a defense against all of those attack vectors.

Anyone who has insider knowledge and/or access to the organization’s confidential data, IT, or network resources is a potential insider threat. 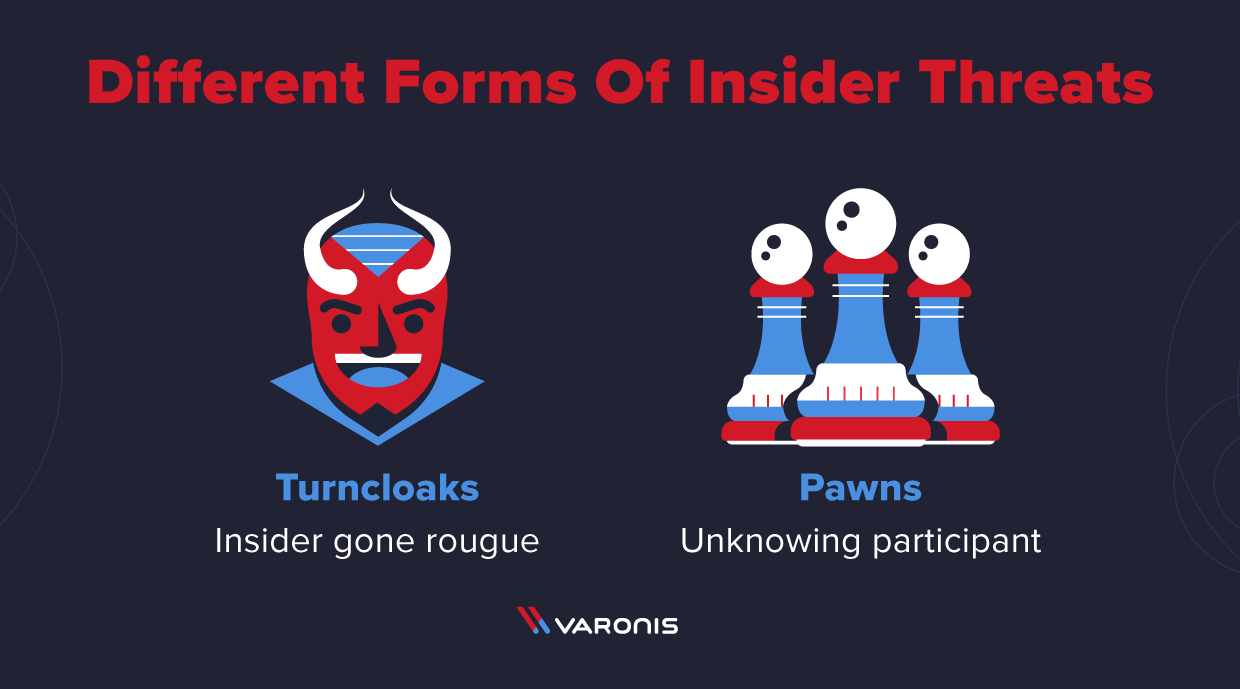 In order to protect your organization from insider threats, it’s important to understand what insider threats look like. The two main types of insider threats are turncloaks and pawns, which are malicious insiders and unwilling participants, respectively.

A turncloak is an insider who is maliciously stealing data. In most cases, it’s an employee or contractor – someone who is supposed to be on the network and has legitimate credentials but is abusing their access for fun or profit. We’ve seen all sorts of motives that drive this type of behavior: some as sinister as selling secrets to foreign governments, others as simple as taking a few documents to a competitor upon resignation.

Gregory Chung, an engineer at Boeing, is an infamous turncloak. Mr. Chung is convicted of using his security clearance at Boeing to smuggle trade secrets to China in exchange for a small fortune, and he is

A pawn is just a normal employee – a do-gooder who makes a mistake that is exploited by a bad actor or otherwise leads to data loss or compromise. Whether it’s a lost laptop, mistakenly emailing a sensitive document to the wrong person, or executing a malicious Word macro, the pawn is an unintentional participant in a security incident.

How to Detect an Insider Threat There are common behaviors that suggest an active insider threat – whether digitally or in person. These indicators are important for CISOs, security architects, and their teams to monitor, detect, and stop potential insider threats.

Common Indicators of an Insider Threat

See the common digital and behavioral signs of an insider threat below.

While human behavioral warnings can be an indication of potential issues, digital forensics and analytics are the most efficient ways to detect insider threats. User Behavior Analytics (UBA) and security analytics help detect potential insider threats, analyzing and alerting when a user behaves suspiciously or outside of their typical behavior.

Here are a few recent examples of insider threats from the news.

Suntrust Bank: A malicious insider stole personal data, including account information, for 1.5 million customers to provide to a criminal organization. 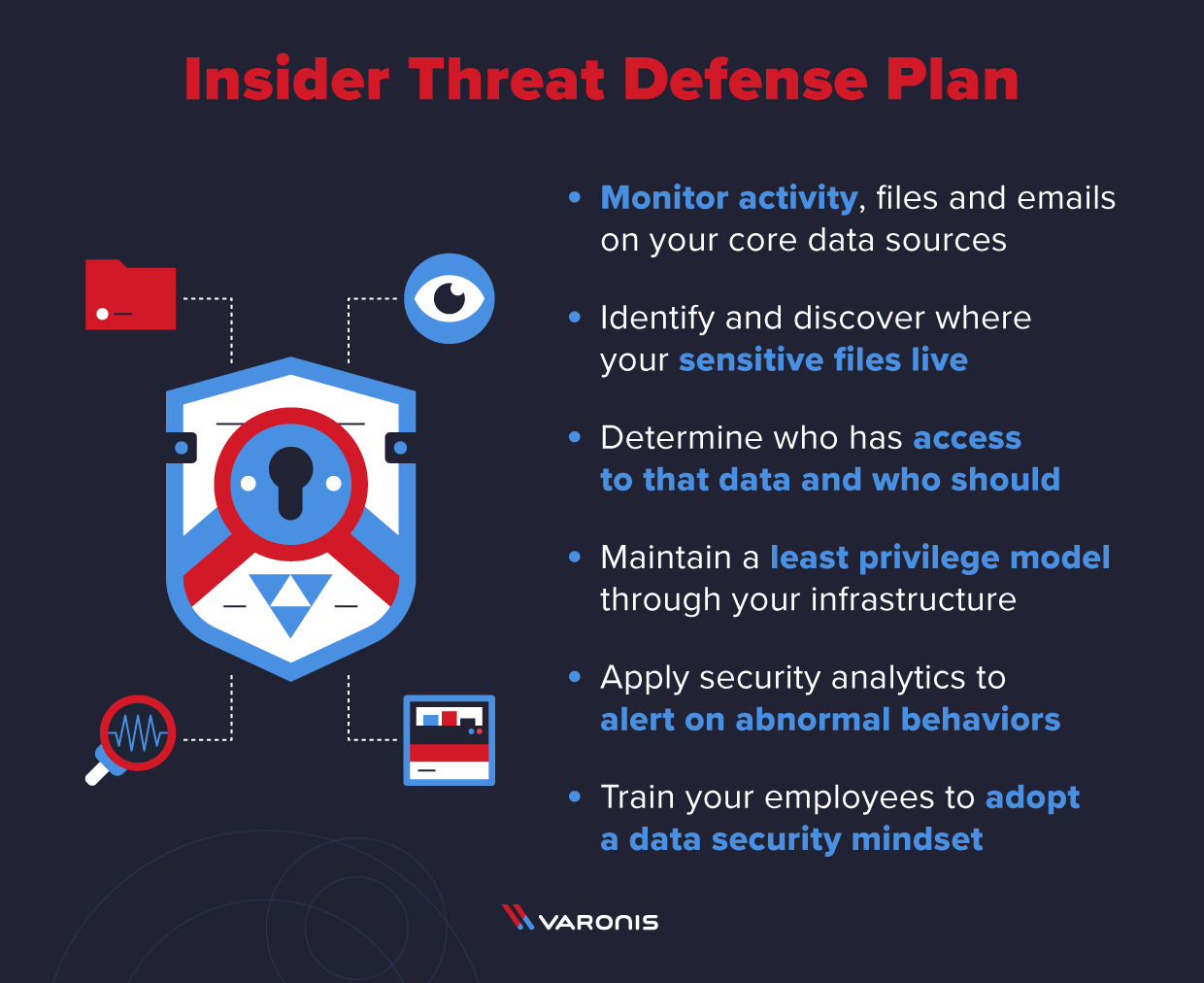 A data breach of 10 million records costs an organization around $3 million – and as the adage says, “an ounce of prevention is worth a pound of cure.”

Because insiders are already inside, you can’t rely on traditional perimeter security measures to protect your company. Furthermore, since it’s an insider – who is primarily responsible for dealing with the situation? Is it IT, or HR, is it a legal issue? Or is it all three and the CISO’s team? Creating and socializing a policy to act on potential insider threats needs to come from the top of the organization. 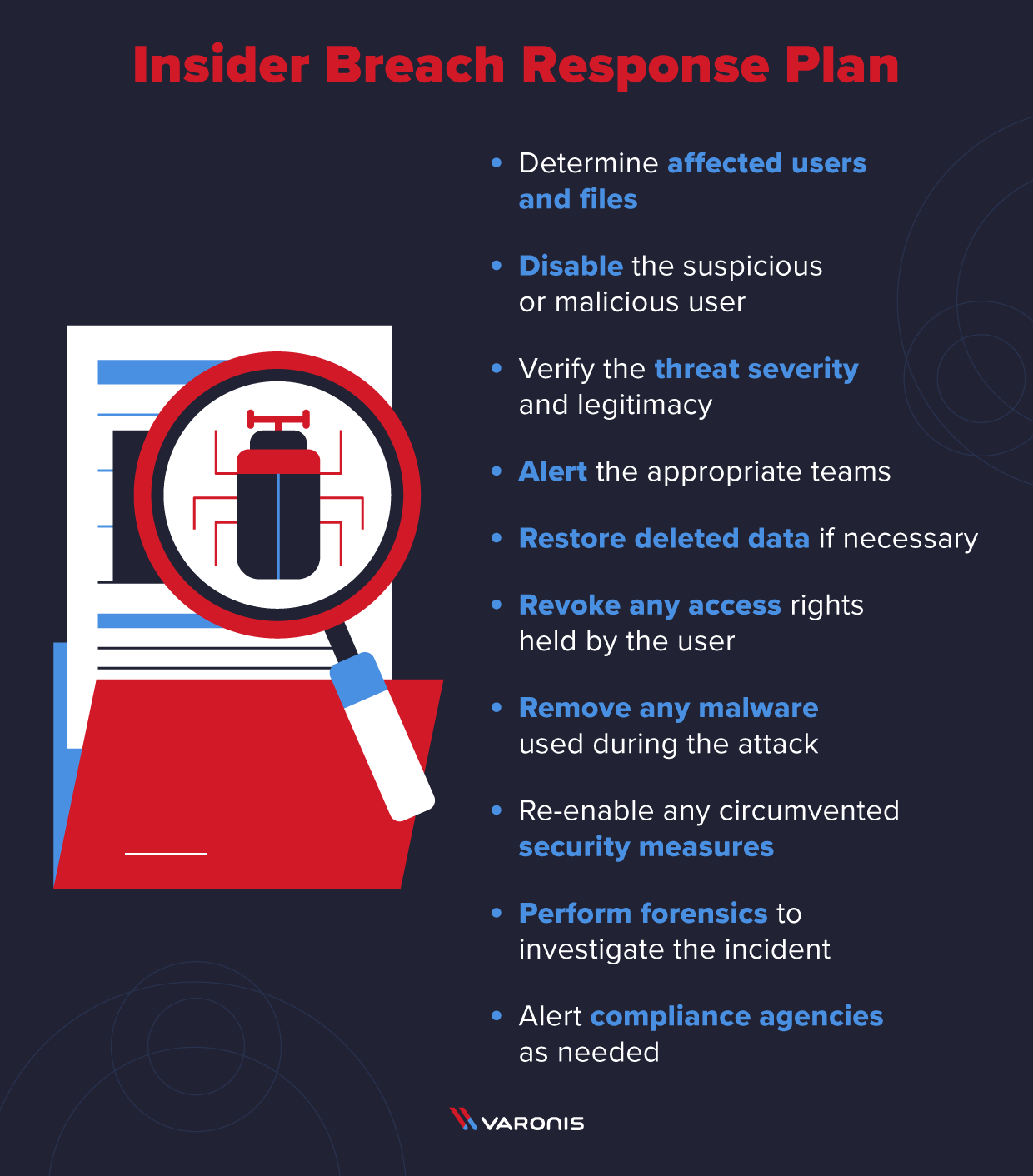 It’s equally important to have a response plan in place to respond to a potential data breach:

The secret to defending against insider threats is to monitor your data, gather information, and trigger alerts on abnormal behavior.

Check out the section below for questions frequently asked about insider threats.

Q: What are insider threat indicators?

Q: What motivates an insider threat?

Q: How do you detect an insider who is supposed to be accessing sensitive data?

A: Users need to access sensitive data as part of their job. You, the security professional, need to discern intent as those users perform their job. You can’t determine intent with a single input – you need multiple data points. Ask yourself – Does the user regularly access this data? Is the user exhibiting any other abnormal behaviors? Are they uploading large quantities of data to email? You can also use Varonis to analyze user behaviors and help you determine what is normal or not.

A: Threshold-based alerts are bad at determining intent, and can lead security pros on wild snipe hunts or a “cry warg” situation. Here is a simple scenario – a user moves one folder of sensitive data to a new location. If you have a threshold-based alert for “500 file operations on sensitive data in one minute” that user just tripped it (I won’t get into the details of why just trust me). Your security team’s time is more precious than chasing down every folder change. Use security analytics to make more intelligent alerting instead.

Q: How useful are watch lists?

A: Watch lists – lists of users that you need to keep an eye on – can be helpful, but they have a real dark side as well. If you think about watch lists hard enough, you can easily see how they could become overused and put your security team in a difficult position with the rest of your users. On the flip side, you want your users to be “security aware” and have a safe method to report suspicious activity. You need to develop and keep to best practices for your watch list. Investigate and drop users off the watch list quickly, and lean on your security analytics to keep tabs on the abnormal behavior for you.

Take insider threats seriously, and most importantly, monitor your users and your data. Varonis gives you peace of mind that your data and your users are staying in their lanes. But if they aren’t you get a full context alert and associated logging to begin a thorough investigation.

Is Your Biggest Security Threat Already Inside Your Organization?