Cybersecurity is a day-to-day operation for many businesses.

A lack of data protection, side effects of a global pandemic, and an increase in exploit sophistication have led to a huge incline in hacked and breached data from sources that are increasingly common in the workplace, such as mobile and IoT (internet of things) devices. On top of this, COVID-19 has ramped up remote workforces, making inroads for cyberattacks.

To give you a better idea of the current state of overall security, we’ve compiled more than 160 cybersecurity statistics for 2022. This will help show the prevalence and need for cybersecurity in all facets of business. These stats include data breaches, hacking stats, different types of cybercrime, industry-specific stats, spending, costs, and information about the cybersecurity career field.

For more in-depth security insights check out our cybersecurity whitepapers.

Last year saw many disruptions in the world of cybersecurity, even as the COVID-19 pandemic continues to recede. Remote work continues to be a focus for many large companies, causing cloud-based operations to proliferate. Expanding 5G networks connected devices at faster speeds and greater bandwidths. Cryptocurrencies exploded in popularity and are now bought, sold, and traded by individuals on a greater scale than ever before.

This is all to say cybersecurity has never been more important. These industry trends and predictions are expected to take hold in 2022 and beyond:

The worldwide information security market is growing rapidly. This is due in large part to organizations stepping up their defenses against cyber threats — and a rise in such threats, including within their own companies.

Unfortunately, most cybersecurity breaches are caused by human error. Considering the skills shortage in cybersecurity, this trend isn’t likely to subside anytime soon. We’ve outlined more details to provide you with an idea of the field as a whole, along with the overall impact of cyberattacks.

To learn more about a variety of cybersecurity topics — and to earn CPE credits — sign up for a free security webinar.

Large-scale, well-publicized breaches are on the rise, suggesting that not only are the number of security breaches going up — they’re increasing in severity, as well.

See the data breach statistics below to help quantify the effects, motivations, and causes of these damaging attacks.

Cybersecurity issues are diverse and always evolving and new malware and viruses are discovered every day. It’s crucial to have a grasp of the most common types of attacks and where they come from in order to guard against future infiltrations.

Stats on IoT, DDoS, and other attacks 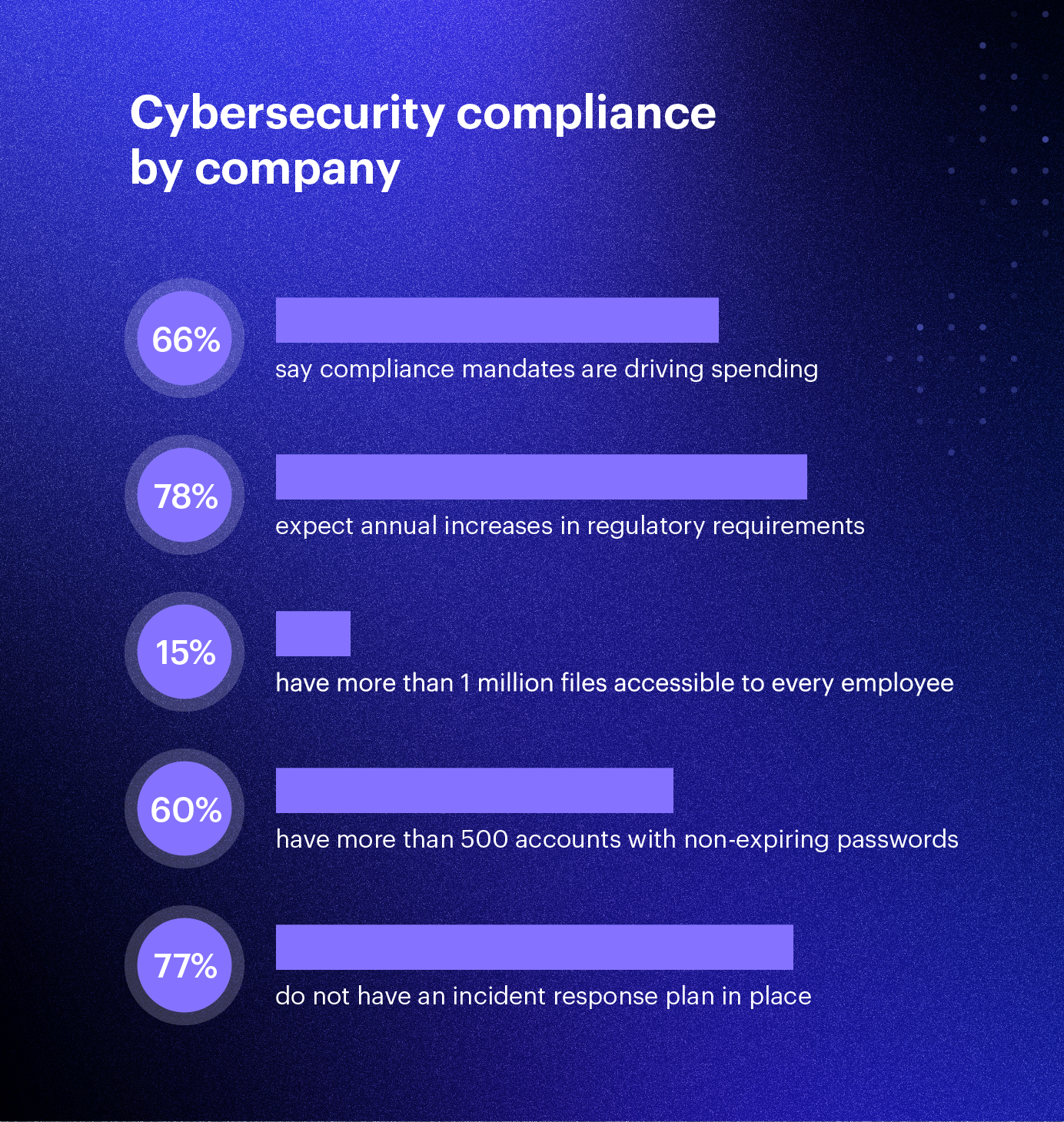 The risks of not securing files are more prevalent and dangerous than ever, especially for companies with a remote workforce. More severe consequences are being enforced as stricter legislation passes in regions across the world defending data privacy. Some stand-outs from recent years include the European Union’s 2018 General Data Protection Regulation (GDPR) and California’s 2020 California Consumer Privacy Act (CCPA).

Companies should take note of takeaways from the GDPR as more regions around the world are expected to emulate the legislation. It’s crucial to properly set file permissions and remove stale data in order to stay secure. Keeping data classification and governance up to par is instrumental to maintaining compliance with data privacy legislation like HIPAA, SOX, ISO 27001, and more.

If you’re curious about data security, try a free risk assessment to see where your vulnerabilities lie.

Average expenditures on cybercrime are increasing dramatically, and costs associated with these crimes can be crippling to companies who have not made cybersecurity a significant part of their budget. Cybersecurity budgeting has been increasing steadily as more executives and decision-makers realize the value and importance of cybersecurity investments.

Take a look at these spending statistics and projections for an idea of where cybersecurity costs stand in 2022.

As cyberattacks increase in frequency, so too does the demand for cybersecurity professionals. With these increases, many companies’ cybersecurity budgets continue to rise as well. However, the imbalance in skilled cybersecurity workers along with the high demand to fill these positions results in a crippling cybersecurity skills shortage.

Interested in entering the cybersecurity field? Now is the time — job openings and average salaries are only projected to grow throughout the decade.

Looking for cybersecurity talent? It may be necessary to come up with creative cybersecurity skills shortage solutions including outsourcing tasks, starting apprenticeships, and partnering with educational and military institutions to find fresh talent.

When it comes to cybersecurity, not all industries are created equal. Industries that store valuable information such as healthcare and finance are usually bigger targets for hackers who want to steal social security numbers, medical records, and other personal data.

This doesn’t mean lower-risk industries aren’t victims, too. They’re often targeted due to the likelihood that they’ll have fewer security measures in place and their information will be more easily accessible.

Try a free 30-minute demo to see how Varonis can help keep your organization’s name out of data breach headlines.

COVID-19 made an impact on every industry across the globe, and cyberspace is no exception. The global pandemic paved new avenues for cybercriminals to target victims via healthcare, unemployment, remote work, and more.

Below are a few of the most impactful cybersecurity statistics related to the pandemic.

Below are some of the most frequently asked questions about cybersecurity, with answers supported by cybersecurity statistics and facts.

Q: Why should I care about cybersecurity?

Q: What are the types of cyberattacks?

A: The most common cyberattack methods include phishing and spear-phishing, rootkit, SQL injection attacks, DDoS attacks, and malware such as Trojan horse, adware, and spyware.

Q: How many cybersecurity attacks are there per day?

Q: How frequent are cyberattacks?

Q: Where can I find more cybersecurity reports?

A: Below are some helpful cybersecurity studies, articles, and resources to deepen your knowledge about the cybersecurity landscape.

Cybercrime is a real threat that should be taken seriously. By assessing your business’s cybersecurity risk, making companywide changes, and improving data protection, it’s possible to guard your business against most data breaches. Don’t become a statistic — the time to change the culture toward improved cybersecurity is now.