What is DNS, How it Works + Vulnerabilities

The Domain Name System (DNS) is the internet’s version of the Yellow Pages. Back in the olden times, when you needed to find a business’ address, you looked it up in the Yellow Pages. DNS is just like that, except you don’t actually have to look anything up: your internet connected computer does that for you. It’s how your computer knows how to find Google, or ESPN.com, or Varonis.com.

For two computers to communicate on an IP network, protocol dictates that they need an IP address. Think of an IP address like a street address – for one computer to “locate” another, they need to know the other computer’s number. Since most humans are better at remembering names – www.varonis.com – than numbers – 104.196.44.111, they needed a program for computers to translate names into IP addresses.

The program to translate names into numbers and vice versa is called, “DNS,” or Domain Name System, and computers that run DNS are called, “DNS servers.” Without DNS, we’d have to remember the IP address of any server we wanted to connect to – no fun.

DNS is such an integral part of the internet that it’s important to understand how it works.

Think of DNS like a phone book, but instead of mapping people’s names to their street address, the phone book maps computer names to IP addresses. Each mapping is called a “DNS record.” 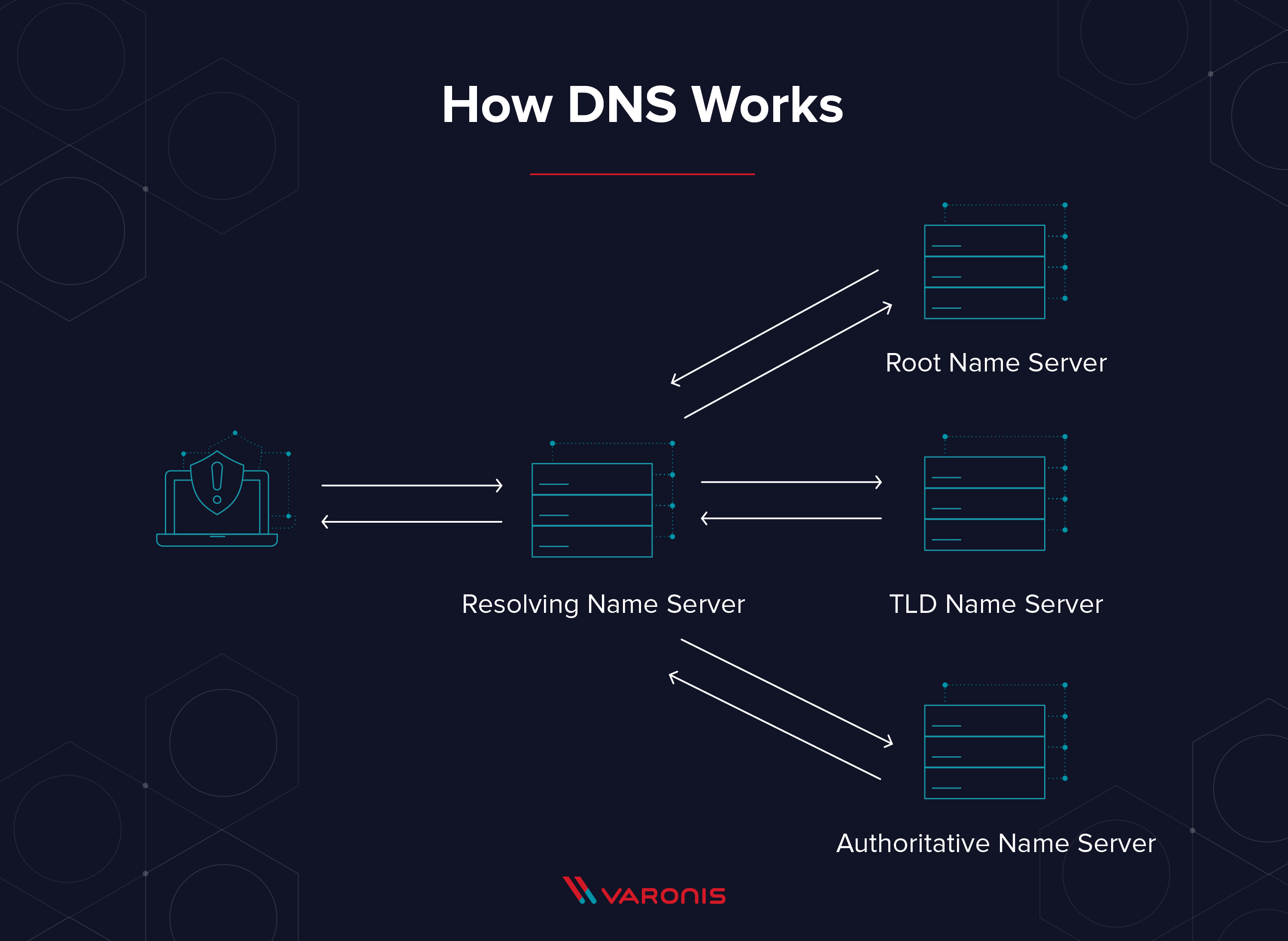 The Four DNS Servers that Load a Webpage

There are two distinct types of DNS services on the internet. Each of these services handles DNS queries differently depending on their function.

DNS was created so people could connect to services on the internet.  For a server to be accessible on the public internet, it needs a public DNS record, and its IP address needs to be reachable on the internet – that means it’s not blocked by a firewall. Public DNS servers are accessible to anyone that can connect to them and don’t require authentication.

Interestingly, not all DNS records are public. Today, in addition to allowing employees to use DNS to find things on the internet, organizations use DNS so their employees can find private, internal servers. When an organization wants to keep server names and IP addresses private, or not directly reachable from the internet, they don’t list them in public DNS servers. Instead, organizations list them in private, or internal DNS servers – internal DNS servers store names and IP addresses for internal file servers, mail servers, domain controllers, database servers, application servers, etc. – all the important stuff.

7 Steps in a DNS Lookup

Let’s look at exactly how a DNS request works.

What are Types of DNS Queries?

DNS queries are the computer code that tells the DNS servers what kind of query it is and what information it wants back. There are three basic DNS queries in a standard DNS lookup. 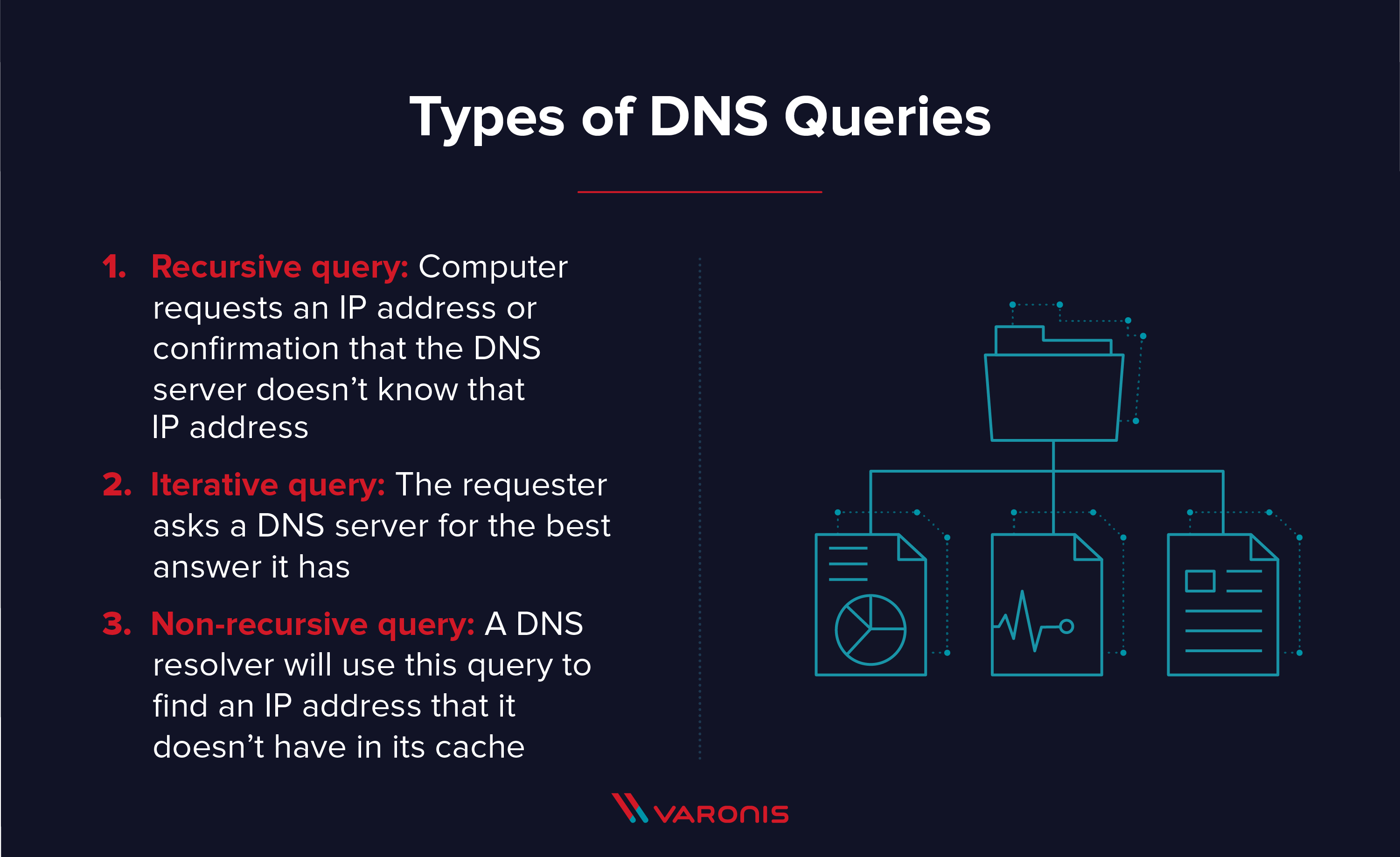 What is DNS Cache + Caching Functions

DNS cache is a repository of domain names and IP addresses that are stored on a computer, so it doesn’t have to ask for the IP address every time. Imagine if every time any user tried to go to www.varonis.com DNS had to query the authoritative name server at Varonis. The traffic would be overwhelming! The very thought of that much traffic is why we have DNS caching. DNS caching has two major goals:

The DNS cache methodology does have some issues, however:

There are a few different types of DNS caching used on the internet:

There are three major vulnerabilities with DNS to watch out for, which attackers often exploit to abuse DNS: 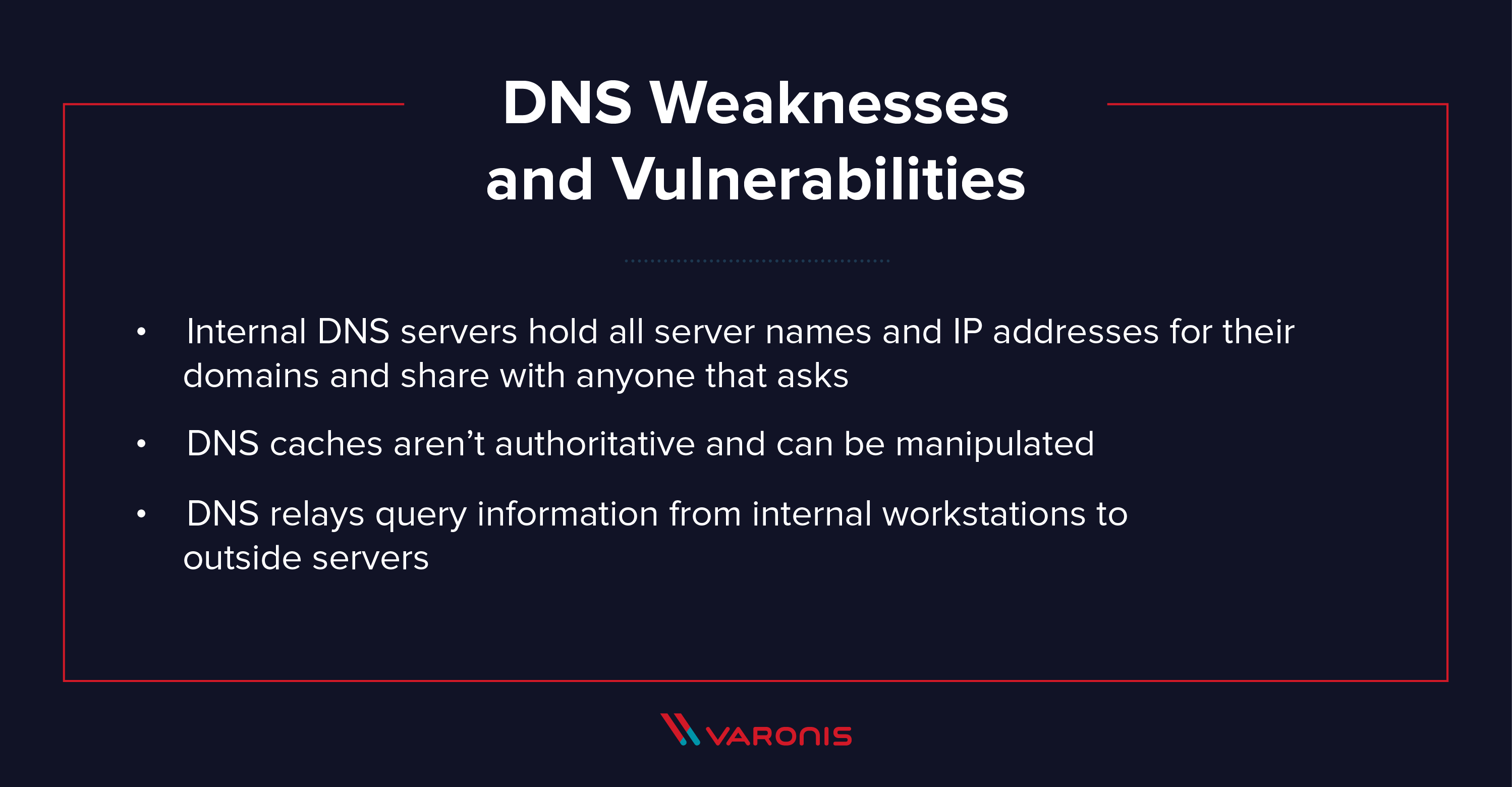 Use DNS for Reconnaissance

Once an attacker is inside a firewall and has control of a computer, they can use DNS to find important server names. Attackers can lookup up names that are associated with internal IP addresses – mail servers, name servers – all sorts of valuable stuff. If they’re savvy enough, they can even get an internal DNS server to send over lots of information about their domain’s zones – this is called a “DNS zone transfer attack.”

If you have a Windows computer, run the following commands as is; if you are Linux user, there are corresponding commands you can look up.

Use DNS to Redirect Traffic

Remember, when a user tries to browse to a website, their computer queries its DNS server for the IP address of the site, or DNS record. If the DNS server has a cached copy of the record, it replies. If not, it queries an “upstream” DNS server, relays the results back to the end user, and caches them for next time.

Attackers have figure out a way to spoof DNS responses or make responses look like they’re coming from legitimate DNS servers. Without getting overly technical, attackers take advantage of three weaknesses in DNS to do this:

If an attacker successfully spoofs a DNS response, they can make the receiving DNS server cache a poisoned record. So how does that help the attackers?

Here’s an example: Let’s say an attacker learns that your organization uses an external application for something important, like expenses. If they poison your organization’s DNS server so that it sends each user to the attacker’s server, all they need to do is create a legitimate looking login page, and users will enter their credentials. They might even relay the traffic to the real server (acting as a “man in the middle”), so no one notices. The attacker can then try those credentials on other systems, sell them or just celebrate with an evil laugh.

Use DNS as a Covert Channel

Let’s say an attacker has managed to get inside a network (corp.com), compromised a host or two, and found critical data that they want to exfiltrate. How can they do that without setting off any alarms? Attackers use a technique called “DNS tunneling” to do just that. They set up a DNS domain (evil-domain.com, for example) on the internet and create an authoritative name server. Then, on the compromised host, the attacker can use a program that breaks up the data into small chunks and inserts it into a series of lookups, like so:

The corp.com DNS server will receive these requests, realize the results aren’t in its cache, and relay those requests back to evil-domain.com’s authoritative name server. The attacker is expecting this traffic, so it runs a program on the authoritative name server to extract the first part of the query (everything before evil-domain.com) and reassemble it. Unless the organization is inspecting the queries its DNS servers make, they may never realize their DNS servers were used to exfiltrate data.

DNS has been around for a long time, and every computer connected to the internet relies on it. Attackers now use DNS for both external and internal reconnaissance, to hijack traffic and to create covert communication channels. Luckily, by monitoring DNS servers and applying security analytics, many of these attacks can be detected and thwarted.

Want to see how?  Join our Live Cyber Attack Workshops as our security engineers execute a live attack – and exfiltrate data via DNS tunneling and see it all in real time!