What Is a Botnet? Definition and Prevention

The majority of cyberattacks these days come in the form of automated attacks, made possible by botnets. But what is a botnet? It’s a way for hackers to leverage a collection of compromised devices to carry out various types of attacks.

In this article, we’ll go over what a botnet is, what kind of attacks they’re responsible for, and how to prevent your device from becoming part of a botnet, as well as reducing the risk of botnet-related attacks from hitting your organization.

What Is a Botnet?

A botnet is a system of internet-connected devices that have been compromised by a malicious actor and can be used for a number of nefarious purposes. Botnets are most famously known for being responsible for Distributed Denial of Service (DDoS) attacks.

However, botnets can be used in other ways and have been known to be leveraged by criminal hacker groups to steal data and further compromise other organizations, and also infect other devices, turning them into “zombie” devices that can be part of the botnet.

How Do Botnets Work? 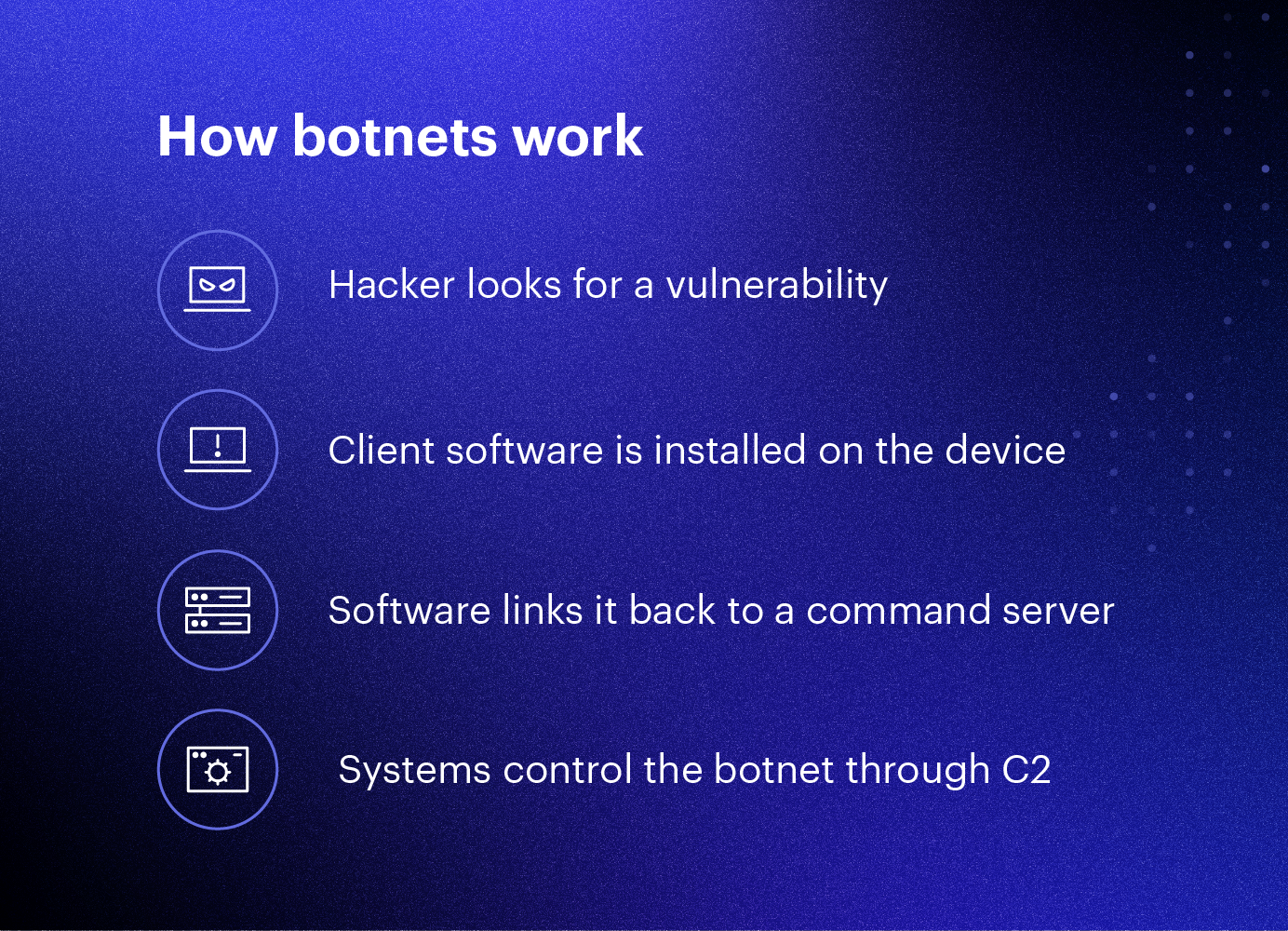 Botnets are only as strong as their network – the more devices in a botnet, the worse attacks can be. Here’s how they work.

Step 1: Vulnerability exploitation - This works like any traditional attack. A malicious hacker will be looking for a vulnerability in a device, standalone workstation, or server that will allow them sufficient control to launch their own attacks from that device.

Step 2: Botnet conscription - In order for devices to become part of the botnet, there needs to be a method to remotely control what each individual device is doing. Client software is installed on the device linking it back to a command server.

Step 3: Botnet coordination - Command and Control (C2) is the general term for the systems that control a botnet. This can be as simple as each botnet client looking for a command on a predefined URL or as sophisticated and weird as taking commands from an IRC channel or comments on Britney Spears’ Instagram account.

Botnets can be used to carry a number of different attacks, and the strength relies on the fact that there are thousands and maybe even millions of devices being used to carry out the attack.

Distributed Denial of Service (DDoS) attacks are the ones most associated with botnets. The botnet can be used to hammer a website with queries, overloading the site and crashing it or key online services. This can have major financial and reputational repercussions.

Botnets can be used to carry out automated spam and phishing campaigns, sending out millions of attacks on thousands of organizations. Even with a 1% success rate, hundreds of devices may be impacted

These are types of automated attacks that try to compromise an account by trying a number of different login combinations. They can use data from leaks or from commonly known passwords and because multiple devices are attempting to get into the account, traditional lockout methods won’t work.

If a hacker is looking to specifically target a company – they can use a botnet to overwhelm the organization. Even if one device successfully infiltrates the organization’s network, it can be enough to steal data or in the case of financial companies, directly steal funds.

The advent of cryptocurrencies has created new opportunities for malicious hackers. They can turn a botnet into mining machines, using the devices’ own computing power to mine cryptocurrency. While it may seem like a benign attack, it will affect your network and devices’ efficiency.

Unfortunately, detection against an attempt to make a device part of a botnet is fairly difficult as it is, by design, a hidden action, and a device may not even be leveraged for months after it’s compromised.

However, there are a number of preventative steps that can also help detect a botnet attempt or attacks from botnets.

The most affected devices are usually IoT or other connected devices that have minimal to little security and aren’t often thought of as attack vectors. This includes internet-connected cameras, printers, routers, smart TVs. Ensuring you have full visibility of all devices in your network can help with detecting and responding to attacks.

Botnets often use automated attacks, meaning some basic security steps can go a long way in stopping these attempts. Change default passwords on all internet-connected devices, enable 2FA whenever possible, and set up firewalls to prevent unauthorized access to devices on your network.

Spam and phishing attempts are some of the more common ways to infect a device. By simply deploying effective filtering and anti-phishing tools as well as educating your employees, you’re cutting your risk down.

Network monitoring tools can help you see whether any devices are making suspicious queries to other networks (or vice versa). If you can’t recognize the entity behind the connection, it may mean your device is compromised.

There are specific tools and solutions that actively prevent DDoS and similar styles of attacks from overloading and overwhelming your website and servers. This is a good investment to consider, especially at key high-traffic times.

It’s easy to prioritize mobile devices, workstations, and laptops, but don’t forget to make sure when purchasing or connecting other devices, that security is kept in mind. Don’t purchase faulty devices and place security controls from day 1.

Disabling a Botnet and Severing the Connection

Disabling an entire botnet isn’t realistically possible for a single organization given the breadth of your average botnet. Entire law enforcement and cybersecurity organizations are dedicated to bringing down these nefarious systems.

However, you can sever your own devices’ connection to the botnet itself. Depending on the botnet, several antivirus solutions can detect a compromise and disconnect from the botnet. If you know which specific devices are compromised, restoring the device to its original settings will also do the trick.

Botnets Can Be Defended Against

While botnets do seem fairly scary given the fact that device compromises remain hidden, cybersecurity fundamentals do defend well against device conscription and the types of attacks botnets carry out.

If you’d like to learn more about what kind of solutions protect against botnets, check out Varonis’ Threat Detection solution.

What is Two-Factor Authentication (2FA) and Why Should You Use It?

What Is a Data Leak? Definition and Prevention