CISA has issued a security bulletin regarding the BlackMatter 'big game hunter' ransomware group following a sharp increase in cases targeting U.S. businesses. To mitigate these attacks, it is recommended that organizations employ multifactor authentication (MFA) as well as updating vulnerable software and systems, such as those that are commonly exploited by ransomware groups.

Over the July 4th holiday, REvil attacked Kaseya's customers using a Sodinokibi payload that, amongst its many indicators of compromise (IOC), included a "Blacklivesmatter" registry entry.

Not long after, REvil seemingly disappeared from the dark web, potentially in an attempt to avoid law enforcement attention or as the result of some take down action.

Aside from being an interesting indicator of compromise (IOC) at the time, the "Blacklivesmatter" registry entry seemingly provides an early indication of things to come, namely the formation of a big game hunter ransomware group using the moniker, "BlackMatter," that, based on our research, appears to be an amalgamation of REvil and Darkside's team members and tradecraft. The groups exhibit strong similarities in their codebases, infrastructure configuration, techniques, and operating philosophies.

REvil and Darkside, as we know, have been two of the most prolific ransomware groups throughout 2020 and 2021, with landmark attacks on Colonial Pipeline and JBS as well as the infamous Travelex incident that saw the organization and their customers suffering disruption for months.

Since forming BlackMatter in mid-July 2021, the group's first foray seemingly targeted a US-based architecture company in, or around, July 28, 2021, some three weeks after the Kaseya incident. 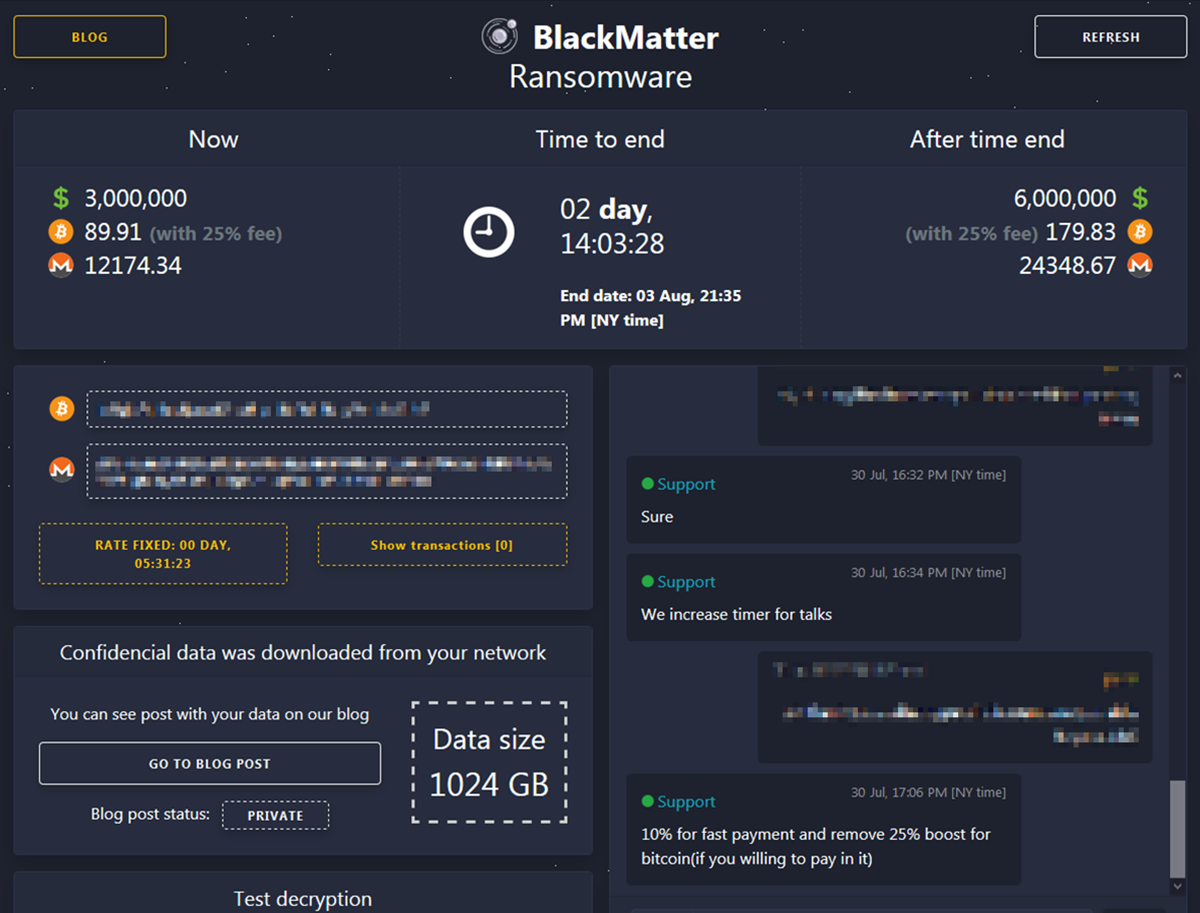 BlackMatter offers threat actors and affiliates access to custom configurable binary payloads for each victim that include unique traits such as a tailored ransom note, often providing proof of the stolen data, as well as the victim's name and their identifier.

Based on dark web posts by an identity purporting to be BlackMatter, the group is only interested in targeting businesses with more than $100M annual revenues and they are avoiding networks that were previously compromised by Darkside or REvil. To incentivize others to provide access to new potential victim networks, theoretically appealing to malicious insider threats as well as initial access operators, the group offers a $100K bounty.

As seen in REvil's recruitment activity during 2020, BlackMatter have provided proof and reassurances of their ability to pay any would-be affiliate by depositing 4BTC (~$247K) with the forum. 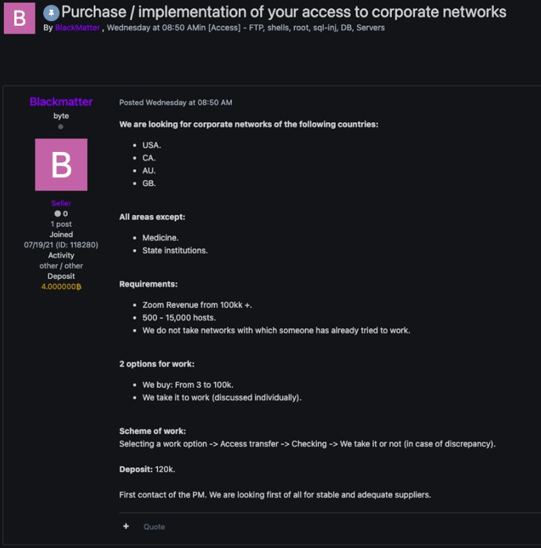 Notably, the group appears to target organizations in English-speaking countries (explicitly listing Australia, Canada, the United Kingdom, and the United States) although they exclude healthcare and government institutions, likely to avoid local law enforcement action resulting from political pressure, especially in the wake of an attack that might be considered an act of cyber warfare.

Unlike many cyberattacks that rely on phishing to establish a foothold, BlackMatter appears to gain initial access primarily via the compromise of vulnerable edge devices and the abuse of corporate credentials obtained from other sources.

While it is possible that some edge cases may see the use of spear-phishing campaigns and malicious document payloads, leading to the compact ~80kb BlackMatter payload being dropped or downloaded, this has not been observed in any investigations we have conducted.

In addition to BlackMatter members exploiting infrastructure vulnerabilities, such as those found in remote desktop, virtualization and VPN appliances or servers, initial access operators affiliated with the group will likely bring their own TTP and may favor exploiting some vulnerabilities over others.

Additionally, the group are thought to make use of credentials obtained from other sources, such as third-party credential leaks, broad phishing campaigns or purchased from dark web marketplaces, taking advantage of credential reuse and exploiting organizations that don't enforce multi-factor authentication on internet-facing services.

In many cases, BlackMatter and their affiliates appear opportunistic, happening on vulnerable organizations potentially based on their susceptibility to a preferred intrusion method rather than investing time and effort toward a specific target.

In other cases, it is apparent that BlackMatter has gained an extensive and intimate knowledge of the victim's infrastructure with victim-specific ransomware configurations, including tailored process and service names to ensure they are terminated prior to the encryption phase, as well as an embedded list of high-privilege credential, these credentials may include domain administrator or service accounts that provide the the ability to access and encrypt data throughout the network.

What can we say about the payload?

The victim-specific ransom note advises the victim of both the data encryption and theft, advising them to install the TOR browser bundle so that the dark web negotiation site can be accessed. 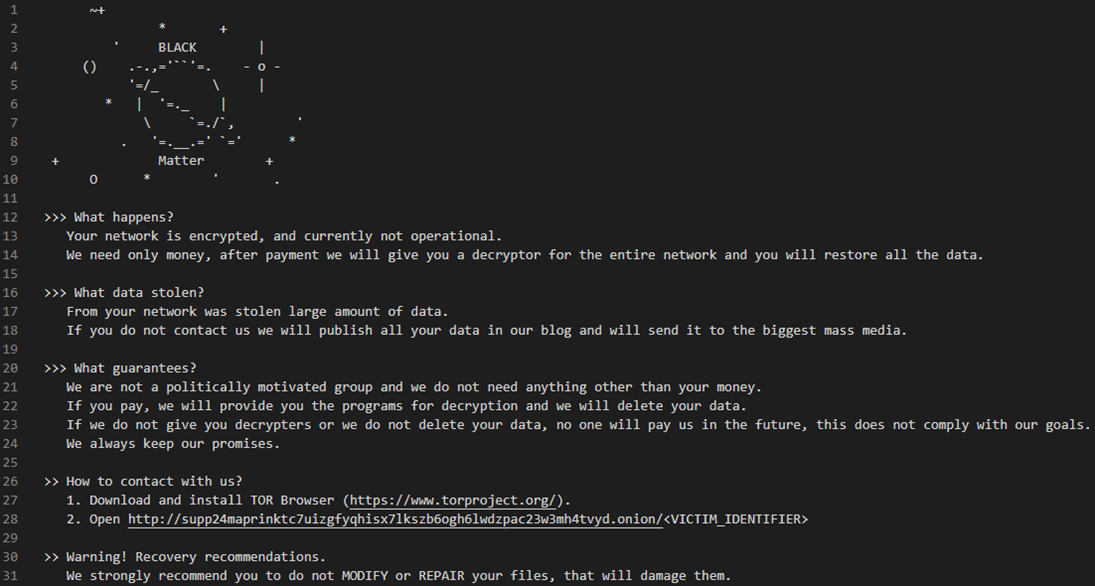 In the past, REvil and Darkside have avoided the encryption of machines identified as being within countries that are members of the Commonwealth of Independent States (CIS), based on identifying the country code used by victim's keyboard layout.

This, combined with early cybercrime forum posts indicating that only native Russian speakers are eligible to work with the group provides a strong indication that the founding members of the group originate and operated from within the region.

Notably, BlackMatter does not appear to perform the same geolocation checks, perhaps in an attempt to avoid association with the region and their past escapades.

This communication was observed as impersonating the following user-agent strings that may be anomalous in some environments:

The BlackMatter configuration, seemingly a JSON structure, allows the payload to be tailored toward a specific victim including: