Return of the Darkside: Analysis of a Large-Scale Data Theft Campaign 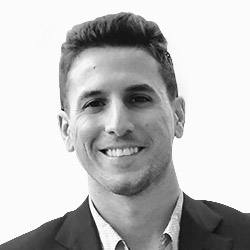 Our team has recently led several high-profile investigations of attacks attributed to an up-and-coming cybercrime group, Darkside. These highly targeted campaigns were conducted in several phases over weeks or months, ultimately targeting theft and encryption of sensitive data, including backups. In this technical blog post, we will review the tactics, techniques, and procedures (TTPs) we’ve observed.

The Darkside ransomware group announced their RaaS (Ransomware-as-a-Service) in August of 2020 via a “press release.” Since then, they have become known for their professional operations and large ransoms. They provide web chat support to victims, build intricate data leak storage systems with redundancy, and perform financial analysis of victims prior to attacking.

The group’s name, Darkside, evokes the image of a good guy (or gal) that has turned from the light. While we can’t conclude that the group is comprised of former IT security professionals, their attacks reveal a deep knowledge of their victims’ infrastructure, security technologies, and weaknesses.

They have publicly stated that they prefer not to attack hospitals, schools, non-profits, and governments, but rather big organizations that can afford to pay large ransoms.

Our reverse engineering revealed that Darkside’s malware will check device language settings to ensure they don’t attack Russia-based organizations. They have also answered questions on Q&A forums in Russian and are actively recruiting Russian-speaking partners.

The group has both Windows and Linux toolsets. Much like NetWalker and REvil, Darkside has an affiliate program that offers anyone who helps spread their malware 10-25% of the payout.

Anatomy of an Attack

The Darkside ransomware attack campaigns stood out for their use of stealthy techniques, especially in the early stages. The group performed careful reconnaissance and took steps to ensure that their attack tools and techniques would evade detection on monitored devices and endpoints.

While their initial entry vectors vary, their techniques are more standardized once inside, and their endgame is coldly efficient.

During the later stages of their attack sequence, they:

We also observed them exploit servers, and then quickly deploy an additional RDP that would preserve access should the vulnerable server be patched.

While neither of these vectors is novel, they should serve as a warning that sophisticated threat actors are easily bypassing perimeter defenses. They illustrate the need for multi-factor authentication on all internet-facing accounts and rapid patching of internet-facing systems. 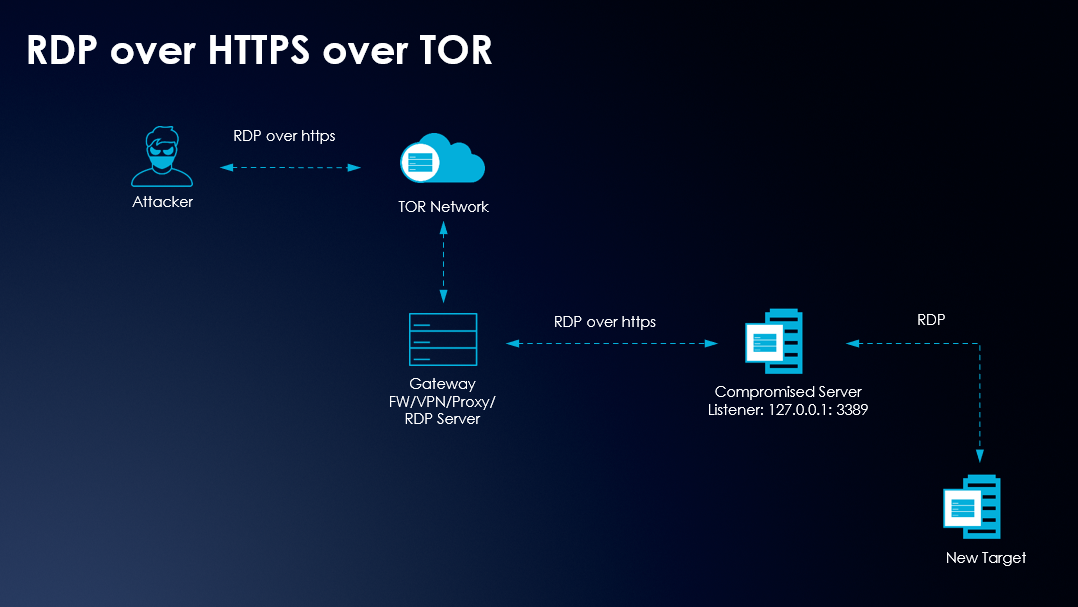 The Darkside ransomware attackers established command and control primarily with an RDP client running over port 443, routed through TOR.  After installing a Tor browser, they modified its configuration to run as a persistent service, redirecting traffic sent to a local (dynamic) port through TOR via HTTPS over port 443, so it would be indistinguishable from normal web traffic. These connections were persistent, so the attackers could establish RDP sessions to and through the compromised hosts, facilitating lateral movement.

We found traces of TOR clients across many servers and observed dozens of active TOR connections.

The attackers used Cobalt Strike as a secondary command and control mechanism. We observed dozens of customized stagers that downloaded customized beacons that connected to specific servers. The stagers (named file.exe) were deployed remotely on specific targeted devices using WinRM, each one configured differently. Cobalt-Strike stagers established connections to a dedicated C2 server to download the Cobalt Strike Beacon.

Threat actors commonly use only a few C2 servers per victim, but Darkside configured each beacon to connect to a different C2 server with a different user agent. This would indicate that Darkside operates a large, well-established attack infrastructure.

The stagers and TOR executables were stored in network shares for easy distribution. The actors avoided installing backdoors on systems monitored by EDR solutions.

Darkside ransomware is known for living off the land (LOtL), but we observed them to scan networks, run commands, dump processes, and steal credentials. Like the command and control code, the attack tools were also executed on hosts that had minimal detection and blocking capabilities. Well-known tools included advanced_ip_scanner.exe, psexec, Mimikatz, and more.

From the initial set of compromised hosts, ticket requests, and NTLM connections to gain access to additional systems and accounts. After a waiting period, the actor used an Active Directory reconnaissance tool (ADRecon.ps1) to gather additional information about users, groups, and privilege, storing results in a file called, DC.txt. Each of their attack tools was deleted after use. The attacker temporarily stored the recon results and credential information on a very active windows server. Interesting file names written and deleted on the server included: Typed_history.zip, Appdata.zip, IE_Passwords.zip, AD_intel, and ProcessExplorer.zip.

In addition to credential harvesting, the attacker mined credentials from User profile folders, including:

The threat actor used Invoke-mimikatXz.ps1 to extract credentials from unmonitored servers and stored them in a file called “dump.txt.” This operation was performed on a high-value target with minimal detective capabilities.

Once the attacker obtained domain admin credentials, accessed domain controllers. In later stages they performed the well-known DCSync attack, where the attacker pretends to be a legitimate domain controller and utilizes the Directory Replication Service to replicate AD information, gaining access to password data for the entire domain, including the KRBTGT HASH.

The active Windows server also served as a hub to store data before exfiltration. Data was mined from hundreds of servers with a batch routine (dump.bat) located in \Desktop\Dump, writing files to the same location, compressing them into 7zip archives with a simple naming convention, *.7z.[001]-[999].

Though they had accumulated elevated privileges, we observed the attacker relax the permissions on file systems, opening them up so that they could access the files with any domain user account.  The batch file, target data, and the archives were deleted by the attackers within hours of collection

Darkside doesn’t deploy ransomware until they’ve mapped the environment, exfiltrated interesting data, gained control of privileged accounts, and identified all backup systems, servers, and applications. We observed several connections to primary backup repositories using compromised services accounts shortly before encryption. By holding off on the encryption phase of the attack, they put themselves in a position to maximize damage and profit.

The ransomware code is delivered through established backdoors (TOR-RDP or Cobalt Strike) and is customized for each victim. The payload includes the executable, a unique extension, and a unique victim ID that allows the victim to access Darkside’s website and make payment.

By using unique executables and extensions, the ransomware easily evades signature-based detection mechanisms. Darkside also provides customized ransomware to other threat actors (Ransomware as a Service) and takes a part of the profit in successful attacks.

One version of the customized code was named, “Homie.exe.” In addition to being customized, we found it also uses anti-forensics and anti-debugging techniques, such as self-injection, virtual machine detection, and dynamic library loading. It also deletes shadow copies on victim devices.

On execution, the malware copies itself to the path “C:\Users\admin\AppData\Local\Temp\” and injects its code into the existing process with a CMD command:

If the malware finds indications that it is being debugged or run in a VM, it immediately stops.

To avoid detection by AV and EDR solutions, the ransomware dynamically loads its libraries, without registering them in its imports section:

Only 3 libraries are imported, which indicates that other libraries’ names resolved dynamically during the malware’s run instead of being explicitly imported.

Using an obfuscated PowerShell command, the malware attempts to delete the shadow copies on the victim device. The obfuscated command:

After the deletion of the shadow copies, the malware first closes specific processes to avoid locked files that can delay encryption, and then begins its encryption routine.

During encryption, the malware appends an 8-character string to the end of the encrypted file names. 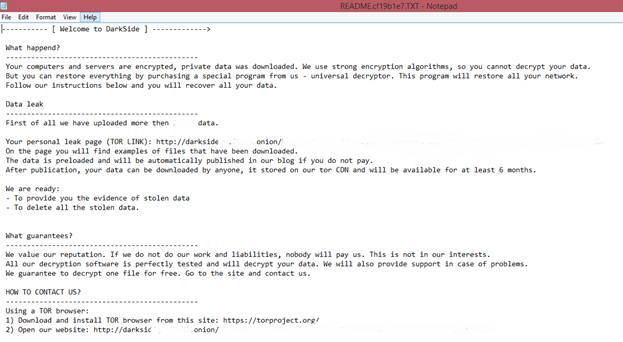 How to Prepare for Threat Actors in 2021

Find and fix the weak links before attackers do

Threat actors look for quick ways to obtain domain admin credentials. Service or admin accounts with SPNs that also have weak encryption, or worse still, privileged accounts with weak or no password requirements are too-easy targets.

In too many organizations, attackers don’t even need elevated credentials to harvest data – the average employee has access to far more data than they require. Lockdown sensitive data so that only the right accounts have access, and then monitor file systems for unusual access and change events.

Organizations with comprehensive monitoring solutions detect and investigate attacks like these more quickly. If you have blind spots on core data stores, in Active Directory, DNS, remote access systems, or in web connections, you’ll struggle to determine which systems were compromised and whether sensitive data was stolen.

If you detect a breach, let Active Directory triangulate the blast radius

If you have any reason to believe you’ve been targeted by Darkside or any other group, please don’t hesitate to reach out for incident response and forensics help via https://www.varonis.com/help.

A special thanks to Rotem Tzadok for leading our Darkside investigations and analysis.

Threat Update 31 – Now are the Zero Days of our Discontent