On July 3rd, at 10:00 AM EST, a malicious hotfix was released and pushed by Kaseya VSA servers that propagated to servers managed by Kaseya, resulting in the compromise and encryption of thousands of nodes at hundreds of different businesses.

This malicious hotfix contained a ransomware payload called Sodinokibi, known to be released by a notorious group called REvil, which resulted in the encryption of the server and shared folders.

Kaseya VSA is a popular piece of software for remote network management, used by many managed security providers, or MSPs, companies that provide IT services to other companies. Network management software is a perfect place to hide a back door because these systems usually have broad access and perform a lot of tasks, making them difficult to monitor.

Unlike the SolarWinds supply chain attack, where the update servers of SolarWinds were compromised, there is no indication that Kaseya’s infrastructure was compromised.

The attackers exploited vulnerable, internet-facing VSA servers commonly running upstream of many victims, in networks of MSPs, using them as backdoors, making it difficult or impossible for the victims to detect or prevent infection as the ransomware flowed “downstream.”

Multiple organizations throughout Europe and APAC have been forced to shut down their business entirely while they remediate.

REvil, one of the world’s most active ransomware gangs, have updated their blog claiming responsibility. Their payment portal is live and they are actively negotiating with victims.

REvil says they have more than a million infected systems, but As of July 6th, roughly 60 of Kaseya’s direct customers appear to have been impacted according to reporting by Bleeping Computer, resulting in about 800 to 1,500 compromised businesses downstream.

Where did the attack start?

It seems that Kaseya VSA servers were vulnerable to a SQL injection attack, allowing the threat actors to remotely exploit them. A CVE was assigned for the vulnerability used: CVE-2021–30116.

Unlike previous attacks by REvil where the dwell time was very long and data was carefully exfiltrated prior to detonating ransomware, this attack appears to have happened very quickly.

It appears that the threat actors knew they were racing against the development of a patch. Security researcher Victor Gevers (@0xDUDE) and the team at DIVD.nl disclosed the vulnerability to Kaseya and had been working with them on a patch, but REvil beat them to the punch: 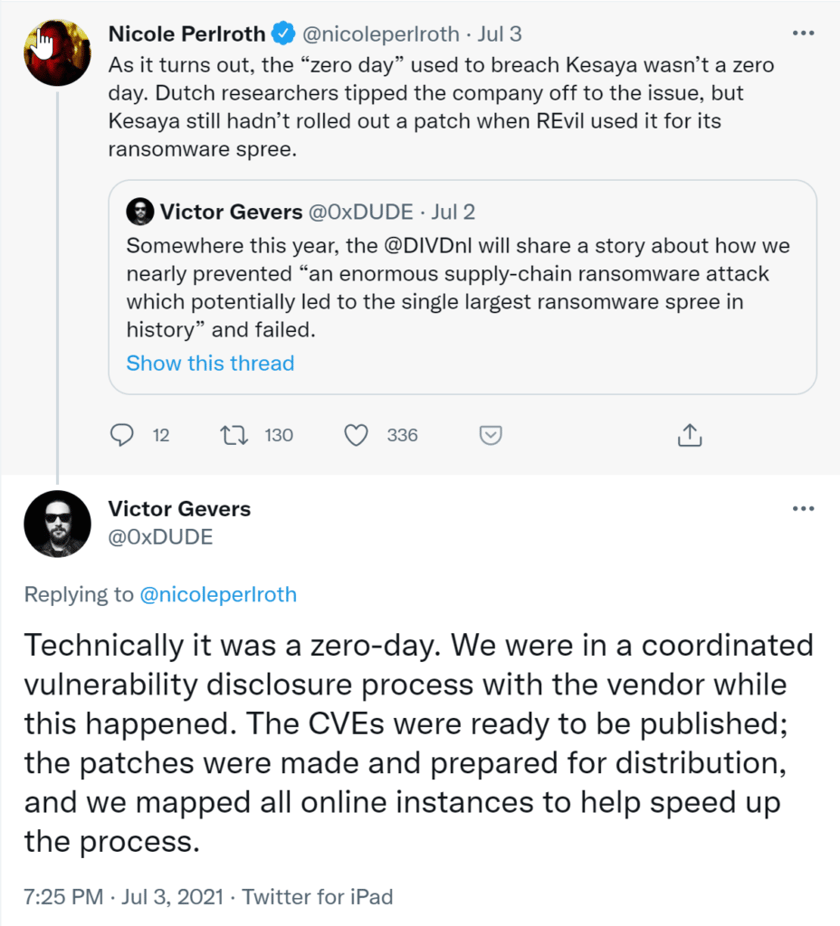 Did REvil know about the pending patch? Were they intercepting communications between the DIVD.nl team and Kaseya? These questions remain unanswered presently.

Based on different sources, the payload was released as part of a hotfix to Kaseya’s customers.

Once published, the hotfix created a folder under the C: drive called kworking, consistent with the behavior of a hotfix.

Once the hotfix has finished writing to disk, it triggers several steps to prepare the machine for infection:

Once complete, the payload overwrites the original MsMpEng.exe with an old and outdated version of the legitimate file, that though the executable is “clean,” it has a flaw that allows it to side-load the encryptor (DLL),  calling it to execute as a service and encrypt the machine with higher privileges.

When executed by the malicious ‘MsMpEng.exe’, the payload will enumerate network drives, physical drives, and processes, and begin the encryption process on the server.

The ransomware will whitelist and skip encryption for the following:

In addition, the ransomware will attempt to kill the processes and remove the services:

Based on the “Sodinokibi” config of this campaign, network communications back to the Threat Actors were in fact disabled.

That’s although the config contained 1,223 unique C2 domains, that were not part of the campaign.

Neither worm capabilities (following the “PrintNightmare” exploit leak) nor attempts to “beacon” and communicate with C2 server during the infection process were observed, hints about the goals and priorities of the threat actors.

In general, C2 communications are associated with these sorts of attacks, mainly those that go “low and slow” and/or exfiltrate data as part of “double-extortion” ransomware. This attack, so far, seems more like an encryption-only, single-extortion attack to create maximum impact.

We can assume, however, that beaconing took place during the hotfix deployment as part of collecting telemetry with the number of businesses impacted.

Two unique MUTEX’s were observed as part of this campaign:

“BlackLivesMatter” was part of REvil’s Sodinokibi piece, observed in previous campaigns from January 2019, while the second MUTEX is considered new.

In addition, the payload will try to turn off the firewall and enable network discovery using Defender later on as a redundant step (FW and defender are already terminated and disabled):

Once all the files on the server are encrypted, the server’s background will be changed: 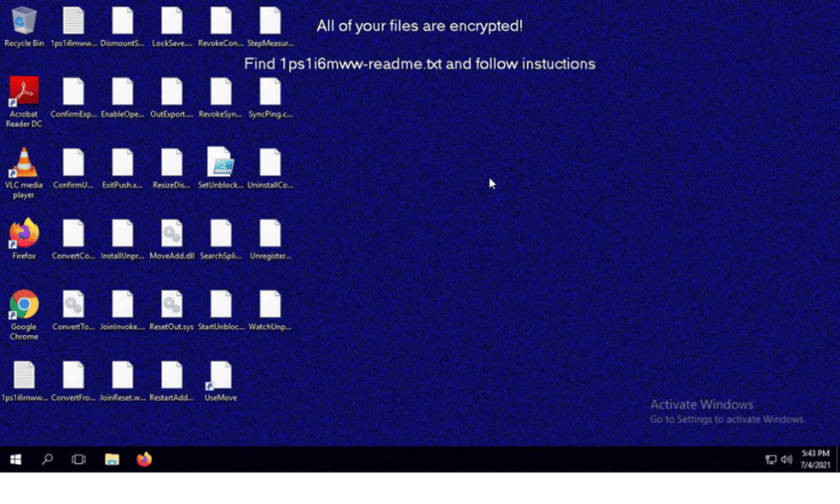 With a ransom note on both the desktop and “C:\” drive, containing the string to check against the ransom negotiation site (can be seen in the appendix).