Learning programming languages can open doors to new opportunities. But with so many languages out there, it’s imperative to pick the appropriate ones to best suit your career, personal goals and interests. Computer programming languages are essential to know if you have an interest in the various careers available in development, programming, ethical hacking, analysis, and engineering, among others like DevOps.

DevOps is a great role to move into as the demand is high and the talent pool is lacking the skills and experience needed for this specialized position. There are many skills that cross over from jobs like system admin and other positions. This sought-after job that can be made more tangible with learning programming languages and coding.

In this guide, we explore the various facets that set programing languages apart, the reasons to learn each one, the languages best suited for different career paths and an exhaustive programming languages list. The comprehensive list of languages includes their origin, type, who uses them, what they’re best for, any special features and resources to help you learn them. Use the menu below to skip to your desired topic: 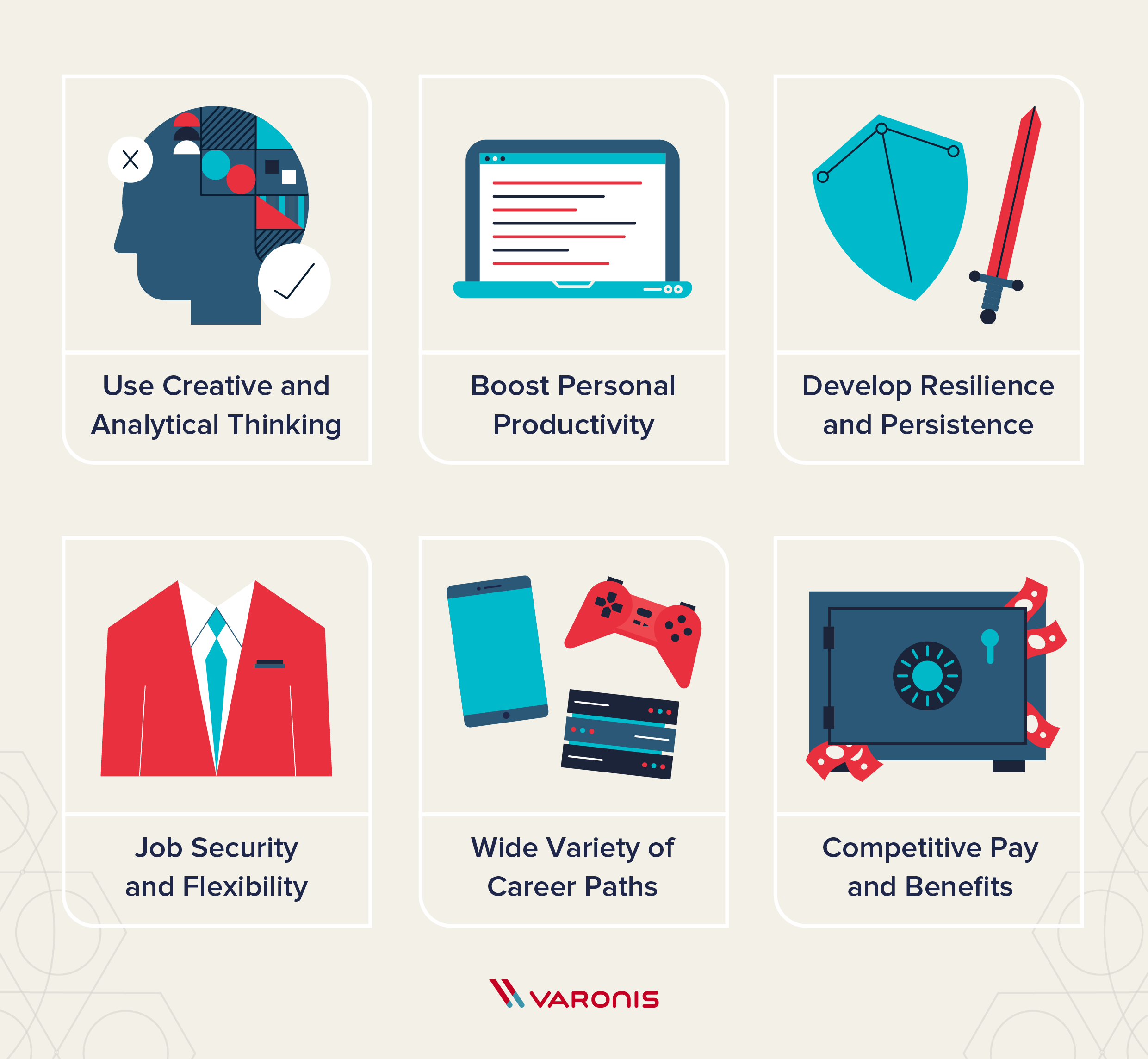 Learning programming languages can help create career opportunities and give you the freedom to forge your own path. Many people learn to code as a hobby and thoroughly enjoy all of the challenges and rewards that come with it. Programming languages are not just interesting — learning them is also a great career move. If you have knowledge in a niche field or market, programming skills make you a huge asset for that particular vertical. According to the Bureau of Labor Statistics, the field of software development is projected to grow 24% with 302,500 additional jobs opening up from 2016 to 2026. The more languages you learn, the easier it will be to pick up new ones. Becoming well-versed helps you build your knowledge base if you ever want to create your own language to solve a specific problem.

This knowledge base of different languages also helps you get better at the languages you already use and can help improve your job performance too. There are many fields and jobs that utilize programming languages to help with development and programming, computer engineering and to create better cybersecurity through pen testing as well. Some great positions that use programming languages include:

Many system admins are looking to move to a similar but different position that gives them the chance to dive into the world of software development. If you’re looking to get into DevOps from a sysadmin or other position here are some of the most sought-after skills: 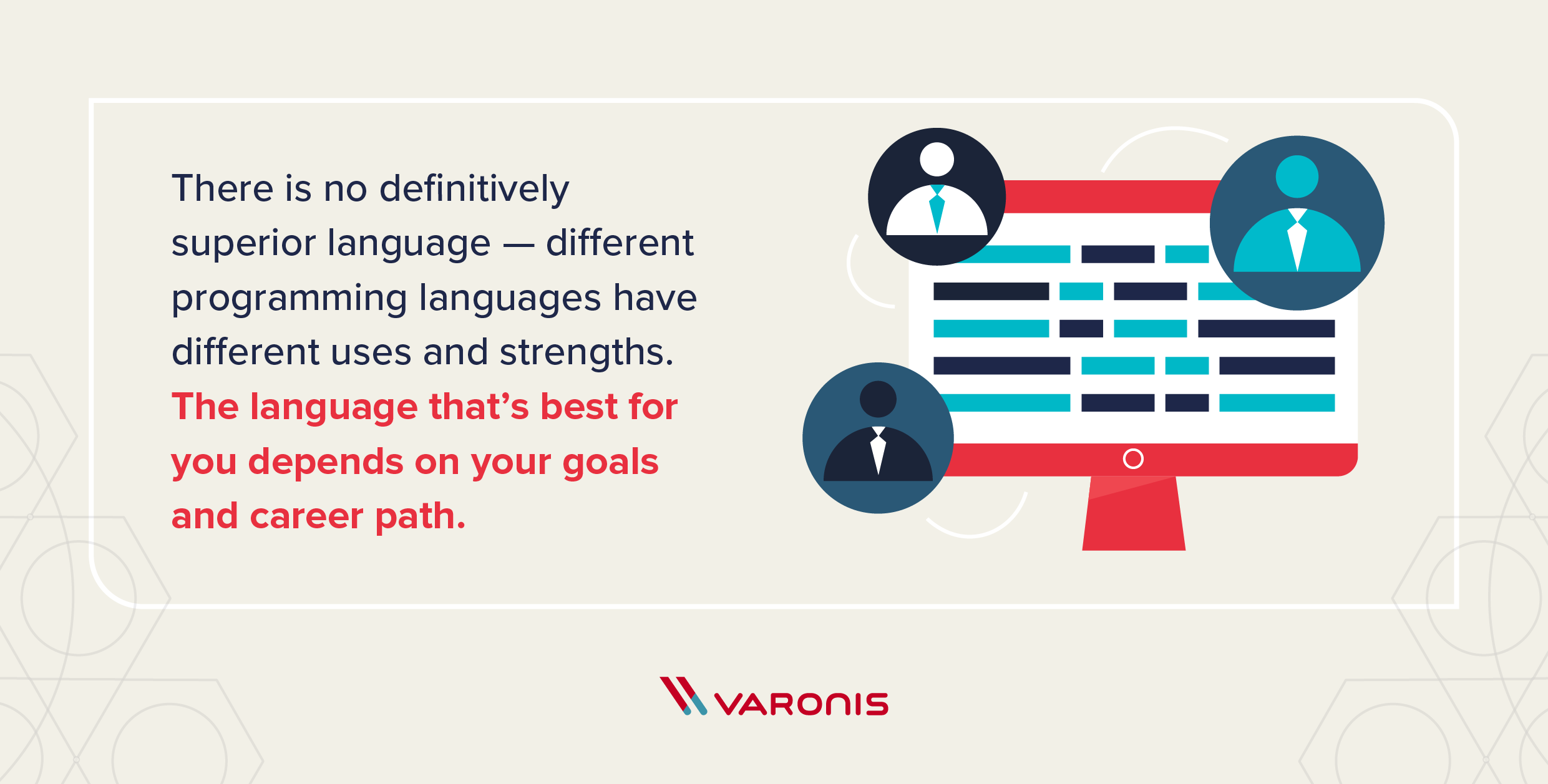 In order to select the best programming language for you, you need to have a goal in mind. As mentioned above, different languages serve different purposes and work more efficiently in solving various problems. Naturally, certain programming languages are more prevalent in a variety of job roles as well so it’s best to look into the languages that best fit your career path or desired job role.

In most people’s experiences, the first language they learn is the hardest, but once you have the fundamentals and mindset for it the learning process becomes quicker. It’s important to remember that the ease, difficulty, and usefulness of a language are pretty subjective, so you may find that your experiences don’t reflect the journey that someone else had learning a particular language. See some of the best programming languages to learn and more details about those languages in the exhaustive list below. These languages were deemed “popular” by their job demand and overall use, depending on your goals the best language for you could be something different.

The comprehensive programming languages list below covers each language’s origin, programming type, who uses it, what it’s best for and any special features. Find resources to help you learn the language under our resources section. Read on to find the language that best suits your needs.

Python is a high-level, object-oriented, interpreted scripting language created in 1991 by Guido van Rossum at CWI.

Java is a web-developing powerhouse. It’s a high-level, object-oriented language created in 1995 by James Gosling at Sun Microsystems.

Ruby is an object-oriented, general-purpose programming language created in 1993 by Yukihiro Matsumoto. Used primarily with the web development framework Ruby on Rails. Ruby on Rails was created by David Heineneier Hansson and was released in 2004. It’s now a mainstay and Ruby is rarely used without it.

JavaScript began as a client-side scripting language created in 1995 by Brendan Eich at Netscape. Today, it runs more or less everywhere, from browsers to servers to devices.

C is a general-purpose language that many other languages were inspired by. It was created in 1972 by Dennis Ritchie at Bell Labs.

An extension of C language, C++ is an object-oriented, middle-level language developed in 1983 by Bjarne Stroustrup at Bell Labs.

C# is a versatile, multi-paradigm programming language that features imperative and declarative functions.  It was released in 2000 by the Microsoft team.

PHP is a popular web-scripting, server-side language created in 1994 by Rasmus Lerdorf.

SQL is short for Structured Query Language used to manage database content, it was first produced in 1974 by the IBM Research Center. SQL has become the ubiquitous means by which data is queried, stored and reported on.

Most applications have a need to store at least some data and relational databases such as MySQL, Postgres and Microsoft SQL Server are the most common data stores. The other languages on this list all have their own mechanisms by which you would connect to a database to store and retrieve data via SQL commands.

Objective-C language is object-oriented and was developed by Next in 1983 — it is mostly used to create apps in OS X and iOS. Consider learning Swift, Apple’s newest release, in conjunction with Objective-C.

PowerShell and Bash are scripting languages, used on Windows and Linux based systems (respectfully) they allow sysadmins to automate tedious or error-prone tasks. Industry-wide, as the shift from on-premise hardware to cloud resources happens there is simultaneously an explosion in IT / Sysadmin complexity happening. To handle this, skill with scripting is a necessity.

Click the button below for a shareable resource about the different programming languages explored above.

Programming Languages To Start With

If you’re just getting into programming, these languages are said to be the most beneficial. While Python is a popular first language choice, the language you pick should relate back to the goals you have.

These programming languages are great options to build up relevant and sought-after skills. Learning them can also help you increase your potential earnings due to their demand.

Your desired career path or job should play a big role in which programming language you choose to learn — see some niche positions and their most used languages below.

If you’re ready for something more complex in your career and interested in DevOps, it’s worthwhile to look into these languages. DevOps aims to use these various languages to streamline the development process and create software more efficiently while integrating business operations as well.

Cybersecurity is an exciting and rewarding career path with a great deal of job growth. If you’re looking to get into pen testing and ethical hacking, make sure you understand HTML well and then give some of these languages a shot.

There is no limit to what you can create if you make use of the right language. Whether you have an interest in ethical hacking, DevOps or application development, keeping your career goals and personal goals in mind is vital to selecting the right language for you. The more applicable languages you learn, the better your career opportunities may be and the more options you can create for yourself.

With a better understanding of different programming languages comes a better understanding of how to keep your assets safe from external threats and breaches — data and cybersecurity are moving to the forefront of every organization if they haven’t already. There are new viruses like Mimikatz and SAML being unleashed all the time and well thought out programming in conjunction with tight cybersecurity is the only way to stay ahead of the curve.