PowerShell uses variables to store information that can be useful later on. Variables also make it easy to change values in multiple places by changing the variable’s definition. You can store information such as names, paths, and the results of commands in a variable.

In addition to mastering scope, you can check out a collection of PowerShell tools for additional resources like editors, modules, and training to take your PowerShell skills to the next level.

What are PowerShell Scopes?

PowerShell scope protects variables and other artifacts by limiting where they can be read and modified. Scope levels protect items that should not be changed. PowerShell has the following scopes available:

Let’s take a look at some examples of different scopes in action. I have a script that defines a variable and outputs it to the screen:

This script defines the variable $greeting in the script (or local) scope. However, that variable and its value will not be available to the PowerShell console, which is the parent scope. Examine the output of the PowerShell commands here: 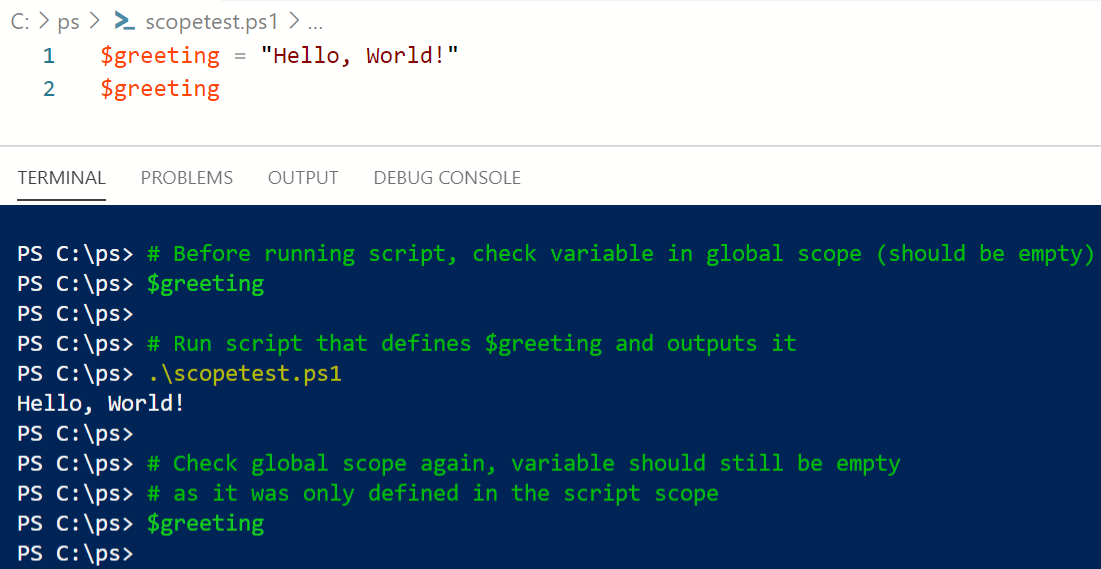 Inside the script, I did not set or modify the $greeting variable. I only displayed its value. The greeting string was inherited from the console as the parent scope by the script file as the child scope.

In the previous examples, we see how a variable defined in the child script scope was not available to the global scope for reference. However, we can use scope modifiers to change the scope of the defined variable. A few scope modifiers include:

For example, I can use the $global: prefix on a variable inside a script to change a variable value that I have already defined in the global parent scope. Examine the script and console output below: 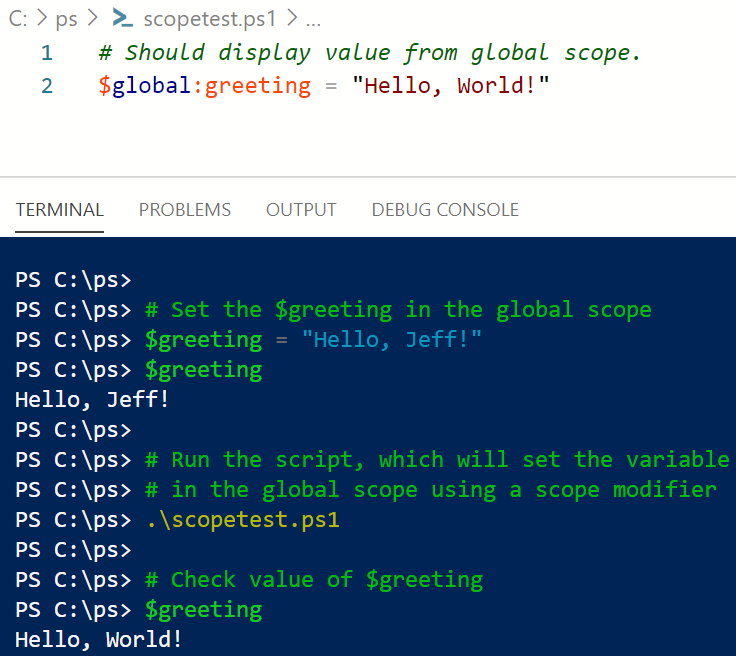 Using Scopes in a PowerShell Module

A PowerShell module is a package of commands, such as cmdlets or functions, that have similar functions or purposes. An example of this is the ActiveDirectory module for Windows PowerShell, which contains commands to manage Active Directory objects.

You can author a module yourself and may need to reference the same variable in different functions. By setting variables using the script scope in a module, the variables are now shareable between the module’s functions.

If I wanted to scope the variable to be available to all functions in the module, I add the $script: modifier to the $name variable, like this:

If I re-import the module using the -Force parameter, I can now set the value of $name in one function and reference it in another.

Note how calling Get-Greeting shows the default message as the $script:name variable did not have a value. After calling the Set-GreetingName function, the Get-Greeting now displays a different value based on the name I passed. This behavior is expected as both functions are now referencing the same variable.

While the example module is simple, you can see how this can be useful. I use this functionality to set API credentials that multiple functions use in modules I write. Check out an example in my twilio-powershell-module GitHub repository.

As I’ve demonstrated in the examples above, scripts and functions will have their own scope outside the global scope. Changes to variables are only affected in that scope unless you use a scope modifier to change the variable’s scope. 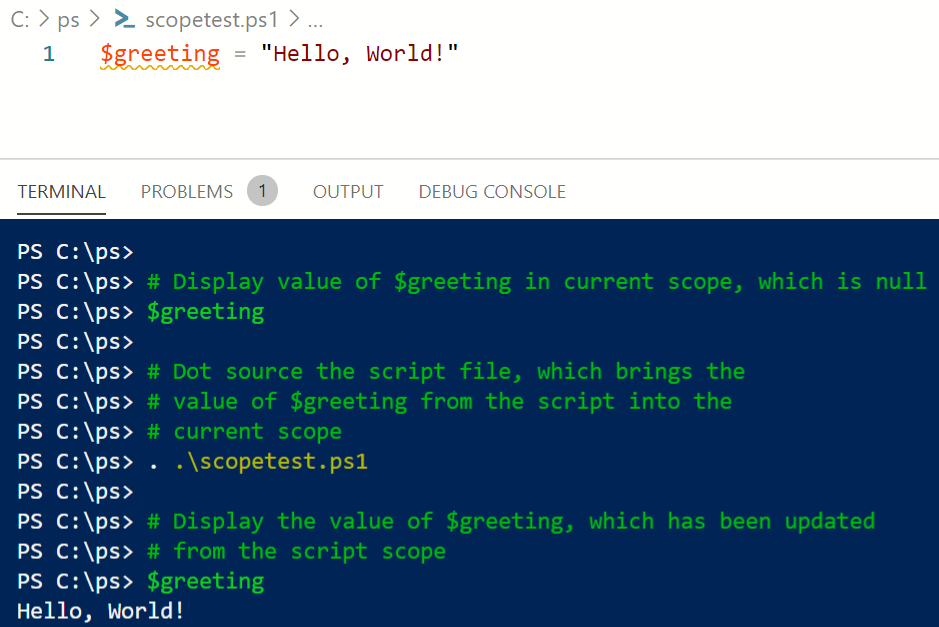 Initially, the value of $greeting in the global console scope is empty or null, and the scopetest.ps1 file sets the value of $greeting. By using dot source notation, the script brings the variable value in the parent scope. You can also use the call operator/ampersand (&) to run a script or function, and its scope will not be added to the current scope.

Understanding scoping in PowerShell is essential when writing scripts, modules, and functions. You might run into a scenario where a variable has an unexpected value, and this could be due to the variable inheriting from another scope. Using other techniques such as module-level scoping and dot source notation can help you build valuable PowerShell tools for your toolbelt.