Inside Out Security Blog   /   Ransomware

Although Ryuk ransomware is named after a famous Japanese anime villain, the threat it presents to businesses and organizations is far from fiction. First appearing in 2018, Ryuk ransomware has been targeting any number of both public and private sector entities, most notably hospitals and healthcare facilities in recent years.

The origins of Ryuk ransomware are debatable, but we do know that it uses open-source malware to help hackers move laterally through systems to conduct ransomware attacks. Here we’ll discuss the history of Ryuk ransomware, how it works, and ways to tell if you’ve been compromised by Ryuk.

We’ll also give you some key tips on preventing Ryuk ransomware attacks, how to mitigate the damage if one does take place, and key technologies you should consider implementing in your anti-ransomware efforts.

What is Ryuk ransomware?

Ryuk ransomware is derived primarily from the popular Hermes commodity ransomware that has been widely available on the dark web and hacker forums prior to 2018. But unlike Hermes, the Ryuk code has been modified and upgraded to specifically target enterprise environments. The ransomware is almost exclusively disseminated via a malware program called TrickBot, entering the system as a Trojan horse.

As opposed to other more highly automated forms of ransomware, once inside hackers manually navigate Ryuk to conduct reconnaissance and select the most high-value targets. Once the data is stolen or systems rendered inoperable, Ryuk attackers typically demand payment in Bitcoin or other cryptocurrencies as ransom payments. One of the biggest recent Ryuk attacks — conducted by hacker group Wizard Spider — disabled the computer systems of United Health Care, one of the largest healthcare providers in the world.

The name Ryuk likely originates from a character in the popular anime and manga series called “Death Note,” with Ryuk being a form of “death god” who could enable targeted killings. Ryuk was first noticed around August of 2018 when large organizations began noticing that they were being targeted specifically by Wizard Spider and other hacker organizations.

Some of the most high-profile Ryuk hacks in 2018 included the Onslow Water and Sewer Authority (OWASA) in Florida and the Tribune Publishing Company, with notable newspapers like the Los Angeles Times being affected. And now in 2021, a new variant of Ryuk has emerged, which autonomously moves laterally within networks and systems without human control.

Ryuk ransomware was a game-changer because it possessed greater capabilities to target large enterprises and organizations. And with new variants, innovations, and hacker groups emerging, Ryuk continues to be an extremely dangerous ransomware tool.

Who is responsible for Ryuk?

While the most notable iteration of Ryuk ransomware first appeared in late 2018, the malware’s origins stretch back a bit further. Ryuk’s original inspiration is a slightly older malware called Hermes. It’s believed that cybercriminal group Lazarus first popularized Hermes, but that Ryuk was ultimately created by another hacker organization called CryptoTech.

How does Ryuk ransomware work? 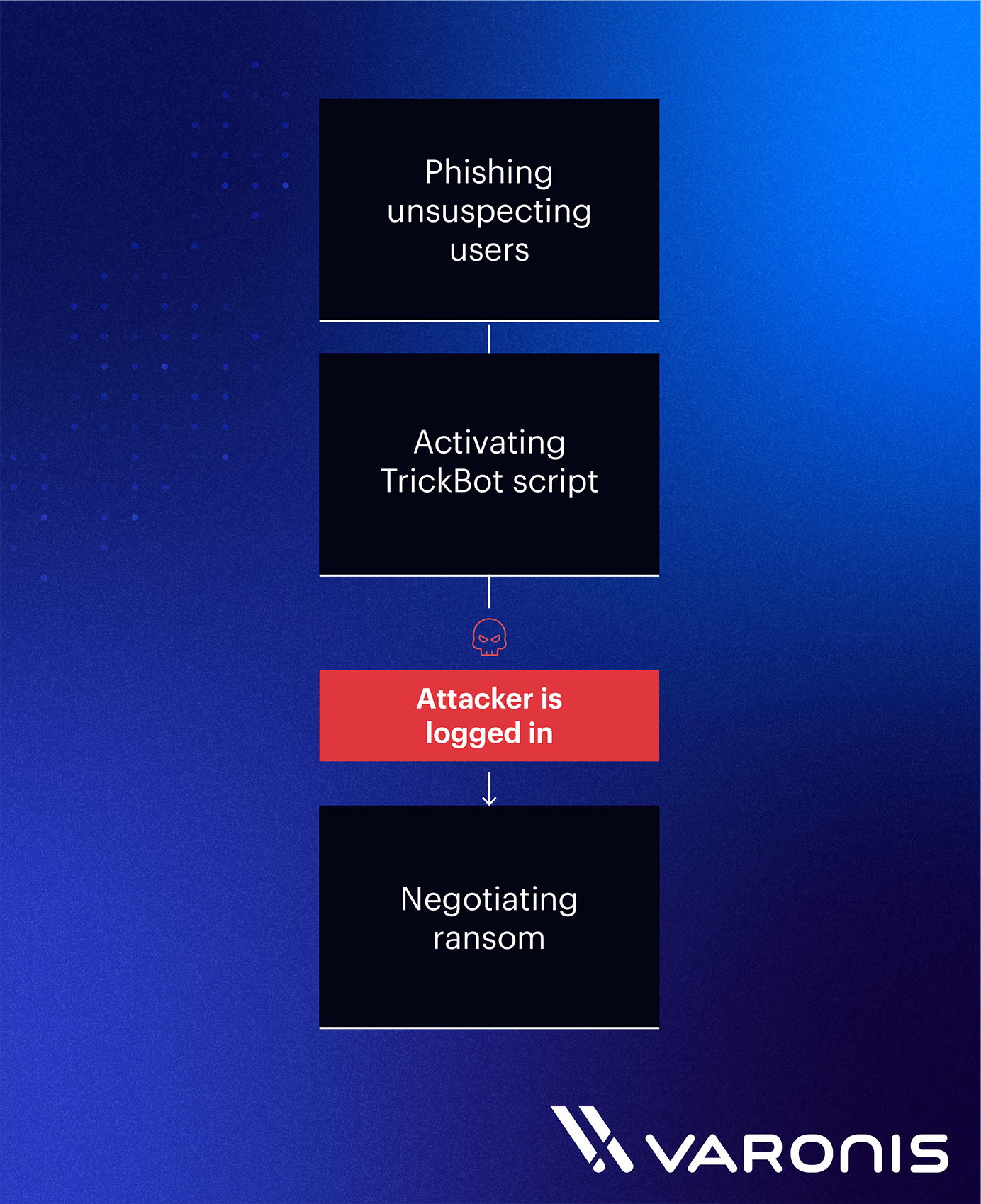 A Ryuk ransomware attack typically occurs in the following sequence of events:

With malicious emails up over 600% since the beginning of COVID-19, it’s imperative that organizations have the right tools and cybersecurity posture to detect and mitigate Ryuk attacks at all three stages.

Indicators of compromise: How to detect a Ryuk attack

Discerning that a Ryuk attack is underway can be tricky, especially since the malware tends to be cleverly hidden in phishing or spam emails. Here are a few indicators of Ryuk compromise and tools that you can use to detect them.

Employing the right technology stack can help pinpoint compromise indicators before Ryuk can do too much damage. But you’ll also need to take proper prevention measures that work in tandem with your detection efforts.

There are several key measures you can take that can help prevent your organization from falling victim to a Ryuk ransomware attack. These involve technology, strategy, and internal measures that will combine to provide a robust defense.

Once you’ve implemented the above measures, you’ll still want to develop a game plan for mitigating the damage of any potential Ryuk attacks.

Many Ryuk ransomware victims are taken by surprise, leaving them no choice but to pay a hefty ransom in Bitcoin. However, there are steps you can take in terms of Ryuk ransomware removal and damage mitigation after you’ve detected an attack.

Once you’ve detected a Ryuk infection, you’ll want to alert your IT teams so they can unpack the malware using a tool like x64dbg. You should set up a secure, virtualized environment to analyze and unpack malware. In the case of Ryuk, you’ll want to target the TrickBot code for unpacking.

Unpacking the malware will then allow you to quarantine it in a secure system location. You’ll then want to immediately begin patching and cleansing the rest of your system entirely since Ryuk’s design allows it to move laterally throughout systems and may spring up elsewhere. Cleaning each computer one by one is a painstaking yet necessary step.

Law enforcement organizations like the FBI have Ryuk ransomware attacks on their radar, partly due to the threat posed to national security and infrastructures like defense and healthcare. While your team may possess solid expertise in ransomware remediation, collaborating with law enforcement should be a mandatory step in your Ryuk response plan.

Ryuk is one of the most dangerous types of malware in the wild today for large enterprises and public sector organizations. Without the proper system and data protection measures, Ryuk can spread rapidly through a system with the guidance of an expert hacker or even automatically with newer variants. You’ll need to take a variety of steps -- from anti-phishing training to advanced anti-malware tools  -- to ensure you don’t end up paying a small fortune in Bitcoin to one of the many hacker organizations now aggressively utilizing Ryuk ransomware.

What is Red Teaming? Methodology & Tools